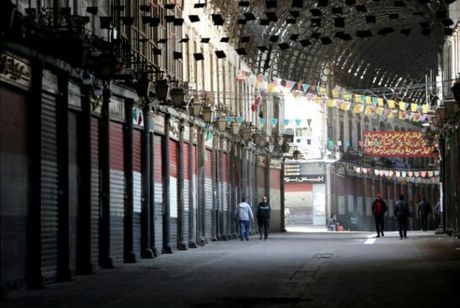 On a deserted street in the old city of Damascus, the new coronavirus has forced salesmen like Ahmad to close up shop indefinitely for the first time in Syria's war.

"We've lived through some tough times during the war," says the 59-year-old, sitting on a chair on the pavement outside his textiles shop.

But "never in my life have I seen the markets and shops close for days on end like now".

All around him, businesses have pulled down their metal blinds or covered up their stands.

The scene is the same across much of the Syrian capital, with squares and markets once thronging with people even during the war now almost entirely empty.

In the century-old covered bazaar of Hamidiya, workers in orange jumpsuits and face masks spray down wooden doors bolted shut with padlocks.

Five cases of COVID-19 have been reported in the country since Sunday, and the authorities have ordered all non-essential businesses closed.

Ahmad this week called in his employees to give them their monthly wages and ask them all to go home.

The shopkeeper says he's never known anything like it. Even as rockets rained down during the conflict, the shops would not remain shut for long, he says.

"I don't know how we're going to live without work," lamented the tradesman, who supports a family of four including himself.

Eighty percent of Syrians already live under the poverty line, according to the United Nations.

Syria's conflict has killed more than 380,000 people and displaced millions from their homes since starting in 2011 with anti-government protests.

It has also ravaged the economy and laid waste to much of the country's infrastructure, including the health sector.

Even with just a handful of cases so far, Damascus has been increasingly taking precautions across the  70 percent of Syria that it controls.

It has closed the border with Lebanon, issued the first night-time curfew ever in the conflict, and suspended transport between provinces.

Schools and universities have closed, as have parks, restaurants, coffee shops and other non-essential businesses.

The guns largely fell silent around Damascus in 2018, after government forces expelled rebels and jihadists from its edges.

But today, "we might be heading into a war of a different kind," Ahmad says, against a "hidden enemy".

In another neighbourhood, the city's world-renowned Omayyad Mosque has for the first time in years closed its gates.

Nearby, shops have also slammed their wooden shutters closed in Hamidiya market.

Apart from the men in jumpsuits spraying shutters with watered-down disinfectant, barely a handful of people walk through.

Among them, engineering student Mustafa is on his way to a pharmacy to stock up on supplies.

For years, "Damascus bustled on energetically -- despite the death, the shelling and the stray bullets," he says.

"But today with the coronavirus, the city is completely paralysed."

Mustafa was supposed to graduate this year, but with lectures now suspended he is not so sure.

"When the decision came out to close all universities, I realised we were really in danger," he says.

"Corona is more than our healthcare capacities can take."

The World Health Organization reports that barely 60 percent of the country's hospitals were functioning at the end of last year, and that 70 percent of health workers have fled the country.

Tho doctors who are left are doing their best to make up for the shortfall.

One of them, Dr Hussein Najjar, 37, has gathered fellow medical practitioners and scientists to dispense advice via a smartphone application.

The app, whose name translates as "Doctor’s stethoscope", allows users to consult the experts directly with questions about the virus.

The idea, Najjar says, is to reach as many people as possible.

Throughout the war, Najjar has tended to the wounded from mortar fire or explosions, and performed more than 200 operations.

But he says this fight will likely be tougher.

"The enemy this time is unknown. It attacks silently," he says.

The only silver lining, he says, is that Syria will benefit from the experience of countries already on the front lines.

As the number of people infected by the virus climbs across the world, Najjar has been furiously networking with fellow doctors to best prepare.

"The battle with the coronavirus will be an all-out battle," he says. "We have no choice."