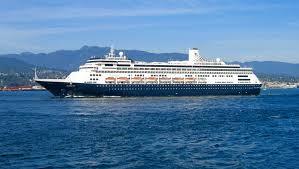 The operator of a coronavirus-stricken cruise ship and its sister vessel has pleaded for a port to allow them to dock, calling for "compassion" and warning that more passengers may die.

Orlando Ashford, president of Holland America Line, made the appeal in a south Florida newspaper ahead of a meeting on Tuesday of state officials who are to consider whether to allow the ships to berth in Fort Lauderdale.

"Already four guests have passed away and I fear other lives are at risk," Ashford said in a column published in the South Florida Sun Sentinel.

"These are unfortunate souls unwittingly caught up in the fast-changing health, policy and border restrictions that have rapidly swept the globe," he said.

"Nations are justifiably focused on the COVID-19 crisis unfolding before them," Ashford said. "But they've turned their backs on thousands of people left floating at sea.

"What happened to compassion and help thy neighbor?"

The Holland America ship Zaandam was originally scheduled to dock in Fort Lauderdale on April 7 at the conclusion of a month-long cruise.

After a coronavirus outbreak on board, it was decided to cut the voyage short, and the Zaandam's sister ship, the Rotterdam, was dispatched from San Diego to its aid.

Hundreds of healthy passengers were transferred from the Zaandam to the Rotterdam and the ships passed through the Panama Canal over the weekend to head for Fort Lauderdale.

But Florida Governor Ron DeSantis said Monday he did not want sick cruise passengers "dumped" in Florida, which already has more than 6,000 virus cases, casting uncertainty on the fate of the vessels.

The Broward County Board of County Commissioners was to meet on Tuesday to discuss whether to allow the vessels to dock in Port Everglades, where cruise ships are berthed in Fort Lauderdale.

"Holland America continues to work on a detailed plan to be submitted to the Port Everglades Unified Command for review," Port Everglades said in a statement. "The ships will not be allowed into US waters until the plan is submitted and approved.

"Our number one priority is to ensure the safety and security of the local community, the passengers and the crew," it said.

Ashford said a total of 1,243 passengers and 1,247 crew members were stranded at sea on the Zaandam and Rotterdam.

He said that as of Monday, 76 passengers and 117 crew members on the Zaandam have influenza-like illness, including eight who have tested positive for COVID-19.

"How will those needing intensive medical treatment receive it with limited shipboard medical staff, facilities and supplies?" he asked.

"We are dealing with a 'not my problem' syndrome," Ashford said. "The international community, consistently generous and helpful in the face of human suffering, shut itself off to Zaandam leaving her to fend for herself."

Passengers have been self-isolating in their cabins on the Zaandam since March 22, according to Holland America.

The Zaandam left Buenos Aires on March 7 and was supposed to arrive two weeks later at San Antonio, near Santiago, Chile.

Since a brief stop in Punta Arenas in Chilean Patagonia on March 14, it has been turned away from several South American ports.