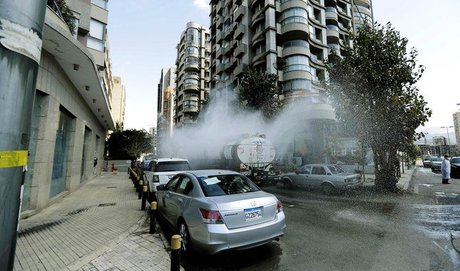 The response of Western countries and international organizations to Lebanon's call for aid to confront coronavirus declined, and the circulars sent to embassies and Lebanese consulates did not list any request for medical supplies, the Saudi Asharq al-Awsat daily reported on Wednesday.

A Lebanese diplomat who spoke to the daily on condition of anonymity said that France is the only European country that has sent urgent medical assistance to Lebanon, followed by Spain which proposed setting up an aid program for neighboring countries, specifically Lebanon.

The government of Spain has asked Oliver Varelli, the European Commissioner for Neighborhood Policy, responsible for the southern Mediterranean countries, to formulate an aid program and provide it to neighboring countries, specifically for Lebanon.

The source pointed out that Hitti and Varelli discussed the assistance that the European Union can provide for Lebanon, and agreed that Hitti would prepare a list of the priorities that Lebanon needs in order to be presented to the European Union in the framework of bilateral cooperation between Lebanon and the Union.

However, he pointed out Lebanon's failure in sending lists of the supplies needed at the state-run Rafik Hariri University Hospital and other hospitals.

Ask help from hezbollah. haven't they set up a great plan to fight the virus? why ask europe that you always criticize :)

" he pointed out Lebanon's failure in sending lists of the supplies needed at the state-run Rafik Hariri University Hospital and other hospitals."

This governement of expert crooks isn't working, they didn't even send a bloody list of the missing supplies! We are dealing with utter incompetent ministers like the previous governments.

Fake doctor minister doesn't even know what they need in a hospital. Best minister ever!!

If you Wonder why Spain and France are the ones showing solidarity... I tell you, These countries (more than any other in Europe) receive massive investment from Lebanese officials and their associates. Lebanese Politicians invest massively in real estate properties in those 2 countries! Thus we conclude that they are the ones providing assistance to their own country under the coverage of Officials and Bankers in these countries.

More than ever before, This is the time to be your own hero because everyone one else is busy trying to save their own citizens lives.