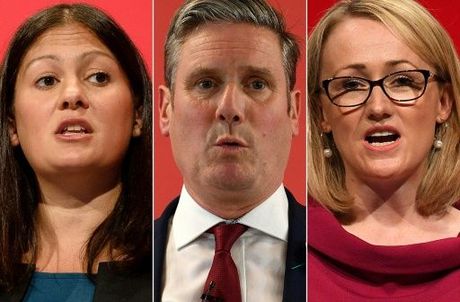 Britain's main opposition Labour party on Saturday unveils a new leader who will take the helm of a defeated and divided party in the midst of the coronavirus crisis.

Keir Starmer, a former director of state prosecutions and Labour's Brexit spokesman, is the runaway favourite to win the ballot of around 500,000 party members and succeed Jeremy Corbyn.

The announcement will be a low-key affair, with a planned special conference cancelled due to restrictions on social gatherings imposed to stem the spread of COVID-19.

Instead, the result will be put out in a press release mid-morning -- and candidates have been asked to pre-record their victory speeches.

Smart and studious, but accused of lacking charisma, Starmer has vowed to get the party back in shape after December's general election, when it suffered its worst result since the 1930s.

It was Corbyn's second election defeat -- the fourth for Labour since it left office in 2010 -- and he was forced to resign.

Starmer has now promised to unite the party after years of bitter arguments about Corbyn's socialist agenda, Brexit and the leadership's handling of claims of anti-Semitism.

"We get the chance to rebuild our party and our movement and, more importantly than that, the chance to put Labour where it needs to be back, which is back in power," he told supporters on a video conference call on Thursday.

Starmer says he is a socialist driven by the desire to reduce inequality, but his pragmatic approach has attracted support from centrists in the party -- and suspicions on the left.

Labour grew out of the trade union movement but moved to the political centre under former prime minister Tony Blair, who was in office between 1997 and 2007.

Corbyn had spent a lifetime on the sidelines because of his left-wing views, and his election as leader in 2015, on the back of a huge surge in party membership, was a shock.

MPs and party members have been locked in an ideological battle ever since.

"There's really a lot of bad blood and mistrust," said Steven Fielding, a political expert at the University of Nottingham.

"The first challenge (of the new leader) will be to put a team together that at least looks like it has the ability to unify the party."

Winning back voters who defected to the Conservatives is also top of the list if Labour has any hope of victory at the next election, currently scheduled for 2024.

Brexit was a toxic issue for the party, torn between eurosceptic supporters in many northern English towns and pro-EU voters in the big cities such as London.

Starmer was opposed to Brexit and played a key role in moving Labour to support a second referendum on leaving the European Union.

However, voters were not convinced and Johnson took Britain out of the bloc on January 31.

The coronavirus outbreak has brought a more immediate challenge.

Johnson's government has imposed draconian curbs on public movement to try to stop the spread -- measures backed by Labour, although it successfully pressed for more parliamentary scrutiny of new police powers.

In response, Johnson's popularity ratings have shot up.

A YouGov survey last week found that 55 percent of the public had a favourable opinion of him, up from 43 percent a week earlier.

Some 72 percent thought the government was doing well -- including a majority of Labour voters.

Ministers have been on the back foot in recent days, however, over the lack of testing for coronavirus and the protection equipment for healthcare staff.

Labour has been pressing the issues, and Starmer said this would continue.

"My instinct will be to be constructive but to ask the difficult questions," he told the Guardian podcast this week.