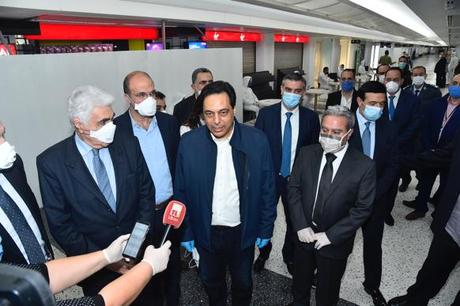 Lebanon on Sunday kicked off the first phase of a plan to bring home willing Lebanese expats in connection with the global coronavirus crisis.

Shortly before an evacuation plane from Riyadh touched down, Prime Minister Hassan Diab, Health Minister Hamad Hasan and several others ministers inspected the measures at the Rafik Hariri International Airport.

“President (Michel) Aoun is closely following all the measures that have been taken as to the return of the Lebanese from abroad and the government is concerned with every Lebanese inside and outside the country,” Diab said at the airport.

The government “will eliminate religious, sectarian, regional and political barriers,” the PM added.

“Lebanon will be born again with everyone’s help, as soon as possible and at all levels,” he promised.

Asked about financial assistance to Lebanese students stranded abroad, Diab said authorities have focused on this point and asked the central bank governor to help the students.

The premier also reassured that all returnees will undergo PCR tests and that measures will be taken to prevent traffic congestion on roads.

“The Foreign Minister says 20,000 to 21,000 expats have registered their names to return and we are seeking to deal with the issue in a phased manner,” Diab said.

“We want to deal safely with the returnees out of keenness on their health and on the health of the Lebanese and the issue might take several weeks,” he addd.