Jerusalem's Palm Sunday March Scaled Back Due to Coronavirus 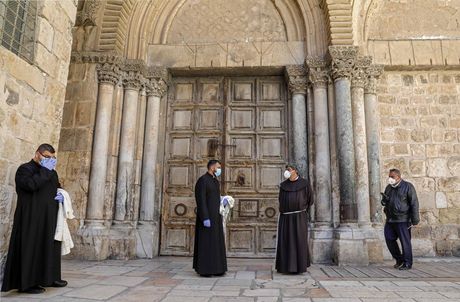 A small group of Franciscan monks and Roman Catholic faithful took to the streets of Jerusalem's Christian Quarter in the Old City Sunday to distribute olive branches after the traditional Palm Sunday procession was cancelled due to restrictions imposed to contain the spread of the coronavirus.

Palm Sunday celebrations start the Holy Week leading up to Easter. Worshipers traditionally carry palm fronds and olive branches and march from the top of the Mount of Olives into Jerusalem's Old City.

While thousands of pilgrims usually participate in the march, this year was limited to a handful of participants. Clerics and faithful went door to door often throwing the branches to Christians looking on from their balconies.

"This year because of the new situation we are trying to come to all the Christians in our Christian Quarter to bring these branches of olives, the sign of new hope," said the Rev. Sandro Tomasevic, a Catholic clergyman at the Latin Parish of Jerusalem.

Palm Sunday commemorates Jesus' entry into Jerusalem and is the start of the church's most solemn week, which includes the Good Friday re-enactment of Jesus' crucifixion and death and his resurrection on Easter.

In Israel, more than 8,000 people have contracted the coronavirus and 46 have died. In the West Bank, nearly 200 cases have been reported, including a large outbreak in the biblical town of Bethlehem.

The outbreak has forced church officials to close churches to the public and scale back religious observances throughout the week. Archbishop Pierbattista Pizzaballa, the top Catholic clergyman in the Holy Land, held a small, closed service at the Church of the Holy Sepulcher, the site where Christians believe Jesus was crucified and resurrected.

The Israeli military began an operation in the hard-hit central city of Bnei Brak, helping to distribute food and medicine. The government last week put Bnei Brak, home to a large population of ultra-Orthodox religious Jews, under a near closure after an outbreak ravaged the city. Israel's ultra-Orthodox population has been disproportionately infected after religious leaders played down or ignored warnings to maintain social distance early in the crisis. Meanwhile, a nursing home in the southern city of Beersheba reported its sixth death in recent days.

The coronavirus causes mild to moderate symptoms in most patients, who recover within a few weeks. But it is highly contagious and can be spread by people showing no symptoms. It can cause serious illness and death in some patients, particularly the elderly and those with underlying health issues.