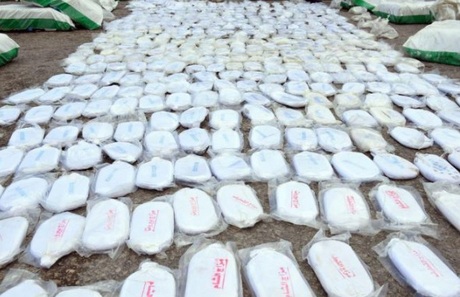 The Internal Security Forces said Friday they had made their largest cannabis seizure in history last month, unearthing 25 tons of the drug intended for Africa.

The Mediterranean country on March 15 announced a lockdown to stop the spread of COVID-19, which has now officially infected 609 and killed 20 nationwide.

On March 16, the ISF stopped "eight trucks headed to the Beirut port carrying thousands of plastic bags of soil," the security branch said.

After inspection, "huge quantities of hashish reaching around 25 tons were seized... that had been professionally hidden inside bags of soil," it said in a statement.

"This quantity is the largest seized in the history of Lebanon," it added, and had been intended for "an African country."

The marijuana came in a variety of kinds including "Beirut mood", "Spring flower", or even "Kiki do you love me", the ISF said.

Consuming, growing and selling marijuana is illegal in Lebanon, but in the marginalized east of the country its production blossomed during the 1975-1990 civil war.

Authorities have since struggled to clamp down on the trade and its production has turned into a multi-million-dollar business.

In 2016, the United Nations Office on Drugs and Crime ranked Lebanon as the third main source of cannabis resin after Morocco and Afghanistan, which are both much larger.

But growers have fought back, protesting over a lack of alternatives for their livelihoods. In 2012, they fired rockets at army bulldozers trying to raze their crop.

Since 2018, lawmakers have however been considering legalizing the drug for medical purposes to give a boost to Lebanon's ailing economy.

God bless hezbollah aka as the iranian resistance for protecting us from Cannabis Drugs by exporting "Beirut mood", "Spring flower", and even "Kiki do you love me" to Africa.

This is probably how Hezbollah finance their evil plans, such as for buying lethal weapons and helping their Iranian masters.

God bless the Resistance, aka HizbelHashish

Hmmm had to read that again, who is the genuis at Kizb who decided to export soil to Africa? where is the Wasta wein el dowlit el Kizb wein looool