9 People including Children Murdered in Baakline 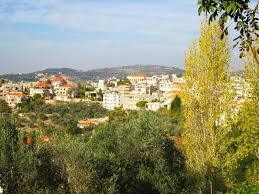 The Chouf town of Baakline witnessed a mysterious massacre on Tuesday in which at least nine people were killed in separate locations.

The victims include a Syrian couple and their two children, a Syrian man, a Lebanese woman and three Lebanese men.

They were identified by the National News Agency as five Syrian workers, a Lebanese woman from the al-Timani family, Lebanese national Karim Nabil Harfoush and two Lebanese men who hail from the border town of Arsal.

Citing preliminary unconfirmed reports, NNA said the killings were carried out by the brothers M. and F. Harfoush with the aim of taking revenge on a Syrian man.

"After M. Harfoush killed his own wife (the woman from the al-Timani family) and four Syrians, his brother (Karim Harfoush) followed him to calm him down so he shot him dead. He then went to an agricultural area where two people from Arsal were cultivating land and he killed them after believing that they were Syrians. Accompanied by his brother, he later killed another Syrian man," NNA added.

It had earlier reported that a Kalashnikov assault rifle and a pump-action shotgun were used in the killings.

“The assailant fled through Baakline's forests near the river area and security forces are pursuing him,” the agency said.

The bodies of the dead were found in three separate locations in Baakline, LBCI TV reported.

It said the killings started at an under-construction house near the river which lies on a dead-end road surrounded by trees.

“A couple and their two children were shot dead there,” LBCI added.

“Lebanese neighbor Karim Harfoush, 27, heard the gunshots and headed to the site on his motorbike to determine the source of the gunfire before being shot dead by the killer, or the gang, who committed the crime,” the TV network said.

“The shooter, or several shooters, then walked around a kilometer to the river where they encountered Lebanese nationals Mohammed and Mahmoud Awdi, who hail from Arsal and were cultivating a grove there,” LBCI added, noting that the two were killed by a shotgun.

The gunman later killed a Syrian worker at a distant agricultural land, the TV network said.

“The crime has confused the area's residents as well as security forces,” LBCI added.

MP Talal Arslan later tweeted that "what happened in Baakline was a personal and family dispute that escalated into a horrible massacre," citing "preliminary information."

MP Marwan Hamadeh of the Democratic Gathering, who hails from the town, said there are indications that the killer could be "mentally disturbed."

"He must be pursued, arrested and put on a quick trial," he added.

"It is similar to the shootings that happen in America," Hamadeh told reporters in Beirut.

TV networks later said that army helicopters were flying over the Baakline forests in search of the shooter.

Baakline's mayor, Abdullah al-Ghoseini, told the daily An-Nahar newspaper that the motive behind the shooting was unclear, adding that it took place in an area that includes housing units for Syrian workers.

Such shootings in Lebanon, where many people keep rifles or pistols in their homes, are rare.

Lebanon is home to more than a million Syrian refugees and other Syrians who are residents.