Baakline Man who Killed 10 including Wife and 2 Brothers Arrested 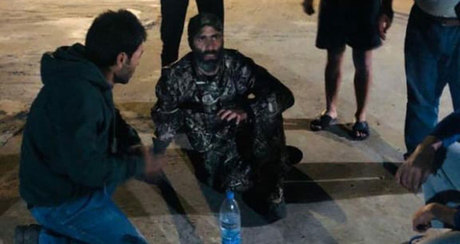 According to preliminary interrogation, it turned out that he killed his brother Fawzi, who had been missing since the killings, NNA said.

He also killed his own wife, Manal al-Timani, and his brother Karim in addition to seven other Syrian and Lebanese citizens including two children.

The agency said he was apprehended in the Chouf town of Ainbal.

According to al-Akhbar newspaper, Ainbal municipal police found Harfoush in a villa's garden, where he was sitting calmly.

“He surrendered to them without resistance before he was taken by Judicial Police to the Beiteddine police department,” the daily said.

“He claimed that he committed the crime after suspecting that his wife was cheating on him with his brother Fawzi although he had no evidence,” al-Akhbar added.

“He told interrogators that he killed his wife with over 13 stabs in their bedroom... He changed his clothes and washed himself to remove the blood before leaving the house to kill the others with a hunting rifle. His second target was his brother Fawzi, whom he killed near the river before hiding the body,” the daily said.

“He then moved to kill his younger brother Karim, whom he accused of being aware of the alleged affair. He later encountered Arsal man Mohammed Awdeh and a Syrian young man so he shot them dead. Later, he searched at an under-construction house and murdered four people including two children. His brother Karim appeared before him at that point so he killed him with two gunshots,” al-Akhbar added.

A judicial source told the AFP news agency that Harfoush had invited his brother to join him on a hunting trip to the Baakline river, where he killed him with a hunting rifle.

Asked why he murdered the seven people who are not his relatives, Harfoush said that he lost control over himself after killing his wife and two brothers.

“A dispute had erupted between the couple five days before the crime, which pushed the wife to leave the house with their two daughters to her mother's house. Her husband visited her at her mother's house on Monday before she followed him to their house on the day of the crime (Tuesday),” al-Akhbar said.

The wife's family has denied accusations against her, in a statement published by local media.

The case has stirred public opinion since the discovery on Tuesday of the first nine bodies near the Chouf town of Baakline, in what Prime Minister Hassan Diab described as an "appalling crime."

On social media Thursday, the hashtag #Baakline was trending, with users condemning the mass killings.

"Down with disgusting male excuses. He is a criminal and a killer," women's rights activist Hayat Mirshad wrote on Twitter.

The grisly events come as Lebanon is under lockdown to stem the spread of the novel coronavirus, and grappling with its worst economic crisis since the 1975-1990 war.

So what if his wife cheats on him, she isn’t his property. Men cheat, women cheat it’s no big deal. If they’re unhappy together they can split or divorce.

Lebanon is so backward.

We dont know if she did cheat on him SOS, its hearsay at this point however what is evident here is as you said how backward some people are. This does not sound like the works of a sane person to start with killing his wife, brothers and two children not to mentio people at will is not the works a normal person. The real loosers are the ones who now have to manage without the support of a father or mother. Funny how the media first started to say that he was heavily armed with a pump action and a AK47 and about 11 people had been killed with others unaccounted for...