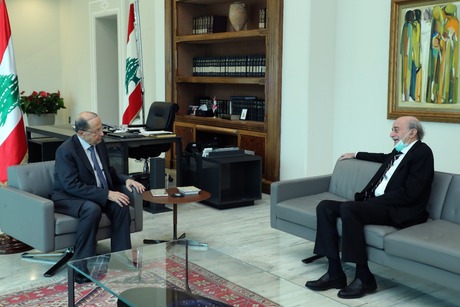 A meeting got underway Monday afternoon in Baabda between President Michel Aoun and Progressive Socialist Party leader Walid Jumblat, following months of tensions between the two leaders and their political parties.

“It is true that the relation with the Free Patriotic Movement has been tense since last summer and we are seeking and demanding its improvement or the management of our differences,” Jumbat said after the meeting.

“As for the government, I'm not seeking to change this government or anything else. We noticed in the past that upon any government change tremendous time gets wasted on the formation of a new government. Today amid this huge magnitude of social and economic crises and with the coronavirus crisis, I don't believe that the situation is appropriate for changing the government,” Jumblat added.

Asked whether he had coordinated his visit with ex-PM Saad Hariri and Lebanese Forces leader Samir Geagea, the PSP leader said: “I have nothing to do with any bilateral or tripartite alliances.”

Al-Jadeed TV said Aoun had requested the meeting to “ease the tensions in Mount Lebanon and limit the impact of the war of words on the region.”

“The Qabrshmoun and Choueifat incidents will be the focus of discussions while the administrative appointments will not be tackled,” al-Jadeed said.

An-Nahar newspaper had reported that a mediator had exerted efforts to secure the meeting.

Other media reports said several mediators, including Christian and Druze religious leaders, had worked on the “pacification meeting.”

Probably went u there to let him know that any requests that the IMF asks regarding the privatization os state owned industries he should reject them.

Here we go again. A week ago he carried out a scathing attack on the administration, the FPM, and the government. Today, here he is meeting Aoun and requesting a few favors. A murdering criminal that cannot be trusted.

Dude.. Jumby..
You're everywhere and nowhere, baby, that's where you're at,
Going down a bumpy hillside, in your hippy hat.
Flying out across the country, and getting fat
Saying everything is groovy, when your tires are flat

And it's high ho silver lining, anywhere you go now baby
I see your sun is shining
But I won't make a fuss, though it's obvious

Flies are in your pea soup baby, they're waving at me
Anything you want is yours now, only nothing's for free
Lies are gonna get you someday, just wait and see
So open up your beach umbrella, while you're watching TV

And it's high ho silver lining, anywhere you go now baby
I see your sun is shining
But I won't make a fuss, though it's obvious

A real revolution is needed and the entire establishment needs to get uprooted once and for all..