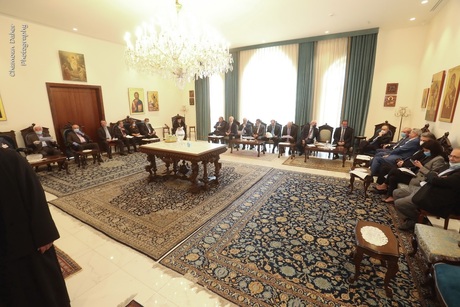 Incumbent and former Greek Orthodox ministers and MPs as well as economic figures met Monday at the Greek Orthodox Archdiocese of Beirut under Metropolitan Elias Aude and decried perceived “injustice” against their community in public administrations.

“The Greek Orthodox have always stood by the choice of the civil state which is based on true citizenship and which does not discriminate among the Lebanese,” they said in a statement issued after the meeting.

“Perhaps the injustice they are facing today resembles the price that some want them to pay due to their openness. Things have reached the extent of eliminating Greek Orthodox citizens from their active role in public life through depriving them of some posts in the Lebanese administration,” they added.

“The 'sect of non-sectarians' -- a historic reference to Greek Orthodoxs which describes their known choices – unfortunately finds itself obliged to confront the unfairness that is targeting it, and in this it is not only defending the rights of its sons, but also the equality and founding principles upon which Lebanon was built,” the Greek Orthodox dignitaries added in their statement.

They said that “until the rise of a civil state,” they will cling to the Greek Orthodox posts in state administrations.

“We also reject the replacement of senior Greek Orthodox employees without good cause,” they emphasized.

The meeting and the strongly worded statement come amid reports that the government intends to sack Beirut Governor Ziad Chebib.

Min ba3d 7mari ma yibut 7asheesh. They are worried about one of their own being called out. The country never comes first but the interest of sect faith and other group out there.