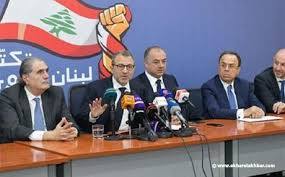 The Free Patriotic Movement-led Strong Lebanon bloc on Tuesday hit back at Marada Movement chief Suleiman Franjieh without naming him.

“As to the counterfeit fuel file, the FPM was the party that pushed for tackling this file before the judiciary after malfunctions” at the country's power plants, the bloc said in a statement issued after its weekly meeting.

“The FPM is in the position of addressing accusations in this file and it does not accept the approach of generalizing the accusations with the aim of protecting the real culprits,” the bloc added, asking the judiciary and security agencies to “shoulder their fill responsibilities” in this regard.

“This file should be a lesson in putting an end to corruption files and depriving those involved of any political cover or condemned and rejected protection,” Strong Lebanon went on to say.

It added: “Let it be a lesson for every politician who dares, after all what happened, to insolently announce that he will carry on with a corrupt approach that cost Lebanon a financial collapse and deprived citizens of their money and rights.”

Franjieh on Monday announced that the head of the Energy Ministry's oil facilities department "Sarkis Hleis will appear before the judiciary, but not before the justice of (FPM chief) Jebran Bassil and the judges of Jebran Bassil."

Noting that he believes in Hleis' "innocence," Franjieh said his movement's conscience is "very clear."

"The judiciary will decide whether Sarkis Hleis is guilty or not and we consider the counterfeit fuel file a politicized file, because the side and judges who raised it are known," Franjieh added.

That message from the FPM is as clear as mud and in their traditional terms conveluted enough to confuse their sheep to believing their lies. Also pointing the finger in others direction is pretty typical.
In the land of theives these guys are Gods....

What a joke. If this is a recent picture there is no social distancing so I hope they all get the COVID Virus!!!