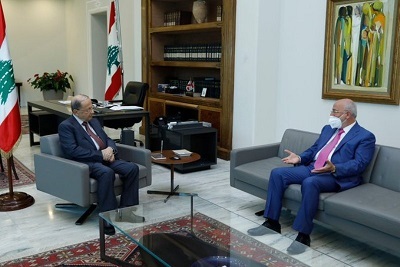 “The meeting tackled the general situations in the country and the latest developments,” the National News Agency said.

“Discussions were also continued over a number of points that were raised during President Aoun's meeting with Jumblat several days ago,” NNA added.

"MP Ghazi Aridi, dispatched by Progressive Socialist Party chief Walid Jumblat, held talks Monday with President Michel Aoun at the Baabda Palace."
This surely must be a joke. Since when does a political party head send a representative to hold talks with the President of the country. The President should have thrown him down the nearest flight of stairs.

Phillipo you needed to be reminded that this is Lebanon and not a State. Since when is a democractic nation run by a single familly?