Nasrallah: We are Closer than Ever to Liberation of Jerusalem 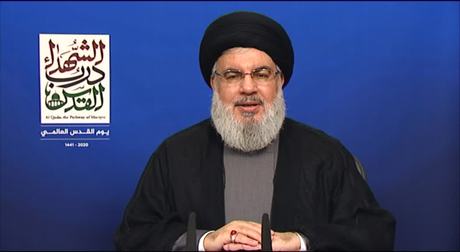 Hizbullah chief Sayyed Hassan Nasrallah on Wednesday announced that the “liberation of Jerusalem” is nearing.

“Today in the year 2020, and despite all the international and regional transformations and all the storms, earthquakes and sedition that have stricken our region, and due to the faith, resilience, patience, honesty, loyalty and communication among the nations and forces of the axis of resistance in our Arab and Islamic world, we find ourselves closer than ever to Jerusalem and to, God willing, its liberation,” said Nasrallah in a televised address marking Quds Day.

Hizbullah's regional backer Iran does not recognize Israel and has marked Quds Day since the start of its 1979 Islamic revolution. Al-Quds is a historic Arabic name for Jerusalem, and Iran says the day is an occasion to express support for the Palestinians and emphasize the importance of Jerusalem for Muslims.

“The real scene upon which any interpretation, vision or evaluation of the future must be based is the firmness, resilience, rise and growth of the resistance forces -- be them governments, nations, factions, movements, peoples or elites -- in Palestine, Iran, Iraq, Syria, Yemen and Lebanon, and across our Arab and Islamic world,” Nasrallah added.

“The real scene is being reflected by the statements and stances of the Zionist officials, who are scared and terrified by the victories of the axis of resistance and are stunned and disappointed by the defeat of their allies and America's allies on several fronts and in several wars and confrontations in our region,” Hizbullah's leader went on to say.

He also noted that Israeli officials “are clearly expressing their extreme concern over the growth of the resistance's capabilities as to quantity, quality, manpower, armament, technical expertise, morale and every other aspect.”

“We in Hizbullah, in the Islamic Resistance in Lebanon, stress our firm commitment to this (Palestinian) cause and pledge that we will carry on this path, alongside our patient, aggrieved, besieged and mujahid Palestinian people,” Nasrallah added.

He pointed out that “the sacrifices and patience of the mujahideen and resistance fighters and our peoples, men, women, youngsters and elders will change all equations.”

Recalling the slain commander of Iran's Quds Force, Qasem Soleimani, who was killed in a U.S. drone strike in Iraq earlier this year, Nasrallah pledged to honor him through “continuing this path, exerting every effort, removing every obstacle, closing ranks, uniting, showing solidarity, preparing all circumstances and paving the way for the day, which will certainly come, in which we will all pray in Jerusalem.”

“Al-Aqsa Mosque will be liberated by the arms and blood of our nation's loyal sons,” he said.

Nasrallah: We are Closer than Ever to Liberation of Jerusalem

We certainly are!
On your bike, Iranian.

Closer than ever to Jerusalem, said the rat and dug itself deeper into the tunnel.

I had to double check the date on my calendar, not this isn’t April 1st.....

Wow, like that is every Lebanese’s topmost priority these days!!
It’s more like WE need liberation from you and your patron state...

Dudes.. wonderful news from hassin al-jardounou... Hallelujah.. Jerusalem is lost no more... OKeh new plan.. screw social distancing.. quarantining and self isolation... Next Tuesday.. Za'atar Bagels in liberated Jerusalem!.. Everybody can come.. RSVP or show of hands... But we need to stop by Dahieh.. and dig up hassin... He's been self quarantining.. in the divine sewers there.. since 2006 following the divine victory.. I promised him he'll come with.. when I go.. no argument!

It's going to be hot summer for you, they are coming after you and after this failure government.