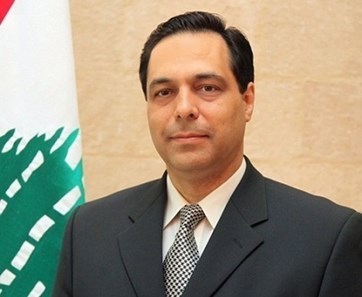 Prime Minister Hassan Diab said the Lebanese will see a “decline” in the prices of goods and that the Central Bank will interfere to stop the currency depreciation and support the import of some food supplies.

Diab said he received a “promise from Central bank governor Riad Salameh to interfere and curb the depreciation of the Lebanese currency, and support the import of some food products. The Lebanese will soon see a decline in prices,” said Diab.

Lebanon on Monday charged a top central bank official with manipulating the exchange rate, and has detained dozens of money changers in recent weeks as part of a larger crackdown on currency manipulators.

Shortly after Diab's speech, Salameh said "necessary measures to protect the Lebanese pound" would come into effect on May 27.

The central bank "will secure dollars for the import of basic food products," in coordination with the economy ministry as part the measures, Salameh said in a statement.

The PM was addressing the Lebanese marking 100 days since the government gained the Parliament’s vote of confidence.

He said his government “did indeed make a lot of achievements,” knowing that it assumed power and the “country was sinking at a record speed.”

“We discovered that the state treasury was empty and we did not hesitate to announce our inability to pay Lebanon's debts in Eurobonds,” added Diab. “The evaluation of the government's performance is up to the people and also to the world, who surprisingly watched what we accomplished.”

The outbreak of coronavirus COVID-19 has “drained further our efforts and time,” added the PM.

“We are on the right track today with the implementation of CEDRE decisions in parallel with our negotiations with the IMF. These will set a solid ground to reconfigure the financial and economic structure of Lebanon,” said Diab.

Acknowledging that Lebanon faces “very difficult circumstances,” he said that “Lebanese have reached the point of despair that reform can take place. Our problem is that people’s value in Lebanon is very low and the authority protects itself before thinking about protecting people in Lebanon.”

the only way to pull out Lebanon from this catastrophe is to implement deep reforms.. but you will never do it because it means you will affect the inner workings of the system.
No party will ever agree to destroy a system they all need to survive...

it's all hypocrisy knowing you are a product of this system....

Lebanon’s politicians do not want to undertake the requisite reforms as that effectively means cutting off their financial lifelines. All of Lebanon’s political leaders control various state institutions, their revenue streams, and hiring. With the accelerating economic and financial crisis, this modus operandi is no longer viable. They simply cannot maintain the corrupt system that sustained them, nor can they recreate it. Yet they are desperate to maintain a stable and whole Lebanon. Their response so far has been a business-as-usual approach. They continue to bicker over civil service appointments, are playing a blame game as they out each other’s dirty deals, and are engaging in a desperate search for ways to kick the can down road. This only delays the inevitable and makes the adjustment all that more painful for Lebanon and the Lebanese.

Please do subsidize food so the people who put you there and granted your the Lebanese citizenshit can smuggle the goods to Syria.

@Peace.....you are absolutely 100% on the spot. I have been saying so myself. There is not going to be any fundamental at the root reform. They ALL feed at the expense of the government. I do party and hope the IMF, World Bank, CEDRE or any another donor DO NOT give single penny to this decaying political class that has run out of ideas

A small country like Lebanon doe snot need 30 ministries and a bloated bureaucracy. Telecom, Electricity, the two biggest waster of money as state assets should be immediately sold to private operators and invite others to tender and compete with a bureau within the Treasury dept for oversight. But you have socialist/communist and islamists in the country who are part of the government that refuse to do so. As former US President Ronald Raegen famously said once "Government is not the solution, Government is the problem"

i m rather pessimistic. If the IMF finds any interests in leaving the lebanese governing system as it is, along with many european countries who are happy with this system, they will unfortunately lend the money and we are back to square one.

see how the gvt has renewed the sonatrach contract knowing it s a scam costing millions of usd to lebanon? they don't care about reforming anything...

and the government allowed the energy minister of the FPM to unilaterally negotiate with companies to build new power stations without going through public tender.