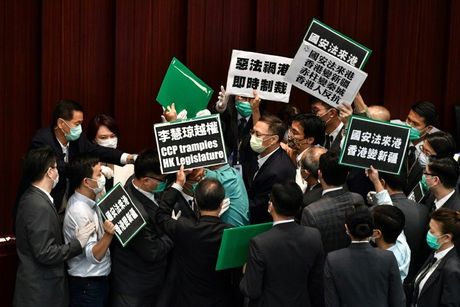 The United States on Friday stepped up threats to strip Hong Kong of special trading privileges as it led Western nations in anger over China's brazen assault on the territory's autonomy.

U.S. lawmakers are pressing for tough action over Hong Kong, which has become the latest front in soaring tensions between Washington and Beijing, but even some supporters of the territory's democracy movement ask if the "nuclear option" would be effective.

Secretary of State Mike Pompeo said that a proposed national security law, submitted Friday to China's rubber-stamp legislature, would be a "death knell for the high degree of autonomy Beijing promised for Hong Kong."

The new law would enforce punishment for "subversion" and other perceived offenses in the city, which was swept by months of massive and occasionally violent pro-democracy protests last year.

In a show of support for demonstrators, the U.S. Congress last year overwhelmingly approved a law that would end Hong Kong's preferential trade access to the world's largest economy if it is no longer certified as enjoying autonomy -- which Beijing promised before regaining control of the then British colony in 1997.

"The United States strongly urges Beijing to reconsider its disastrous proposal, abide by its international obligations, and respect Hong Kong's high degree of autonomy, democratic institutions and civil liberties, which are key to preserving its special status under US law," Pompeo said in a statement.

Pompeo had delayed the certification decision, citing the just-started session of the National People's Congress, and lawmakers had earlier anticipated that President Donald Trump's administration would shy away from ending Hong Kong's trading status.

Trump had only reluctantly signed the Hong Kong act, which was strongly opposed by Beijing, as he was negotiating a deal to end a trade war with China.

He nevertheless cautioned of the risks of the United States revoking the city's trading status, while acknowledging that many in Hong Kong were angry and would back the move.

"This is almost like a nuclear option, which once you use it, everyone will get hurt, and it will be very hard to build Hong Kong back up again," Kwok told the conservative Heritage Foundation by videoconference.

Kwok said the most effective leverage would be to stress how investors would be spooked by the narrowing of autonomy in Hong Kong, one of the world's pre-eminent financial capitals.

"If China is so stupid as to believe that they can do away with Hong Kong and they don't need an international financial center, then of course there's nothing which one could do to dissuade them to do otherwise," he said.

Senior Trump economic advisor Kevin Hassett made a similar case to reporters at the White House, saying that "disdain for the rule of law" would be "very, very bad for the Chinese economy."

Hong Kong is only one flashpoint between the United States and China, the world's top two economies.

Trump and Pompeo have accused Beijing of being responsible for the coronavirus pandemic by not acting more quickly -- an argument that critics say is meant to deflect from Trump's own handling of the crisis.

Richard Haass, president of the Council on Foreign Relations, warned that the Pacific powers were at "their most dangerous moment" since they normalized relations four decades ago.

"There is a growing list of disagreements (Hong Kong being but the most recent) but no strategic rationale for the relationship or plan to limit friction. Both countries stand to lose," Haass wrote on Twitter.

Congress, with broad bipartisan support, is looking to ratchet up the pressure.

Following China's announcement on the law, two senators, Republican Pat Toomey and Democrat Chris Van Hollen, proposed a law that would impose sanctions on anyone involved in curtailing Hong Kong's autonomy, including banks.

Senator Marco Rubio, a prominent Trump ally, said that Hong Kong showed that China will "lie to get any deal."

Martin Lee, considered the grandfather of Hong Kong's democracy movement, made a similar point to the Heritage Foundation, warning that Beijing could renege on Trump's cherished trade agreement.