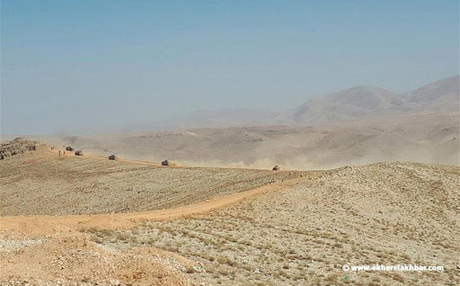 The Lebanese Army has closed “90 percent” of the illegal border crossing used to smuggle different kinds of merchandise, mainly flour and diesel oil into Syria, MTV station reported on Saturday.

MTV reporter said the military used dirt mounds and cement blocks to close the crossings including one in the Meshrfeh region in Hermel area.

Vehicles used by smugglers were confiscated by the army and internal security forces.

Smuggling operations between Syria and Lebanon extend from Wadi Khaled in Akkar to the Bekaa region passing through Bekaa’s town of al-Qasr.

The army set checkpoints on these crossings to control any breach.

The army says that between May 7 and 14, it seized about 215,000 litres of fuel oil and 71 tonnes of flour at the Lebanese-Syrian border, arresting many.

The state spends billions of dollars on subsidies on essentials such as fuel and flour, but smugglers often sell them in war-torn Syria at a hefty mark-up.

wahahaha! it wasn't possible before and all of a sudden they close? what a propaganda!
pityful

What a joke....how about use the technology you idiots.
Fly camera robots and when spotting smugglers send them the army helicopter.
Cut the expenses and do not spend more money to send soldiers on a maze.