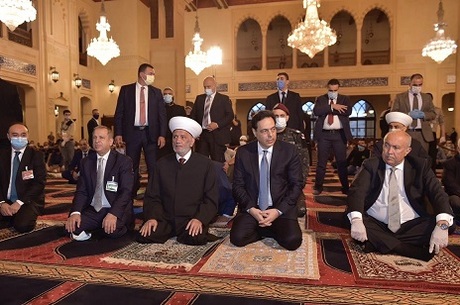 Grand Mufti Sheikh Abdul Latif Daryan stressed Sunday that Dar al-Fatwa, the country's highest Sunni Muslim religious authority, does not tolerate any “marginalization” of the premiership or “encroachment on the prime minister's powers.”

“We do not accept the violation of the constitution, the marginalization of the premiership or encroachment on the prime minister's powers,” said Daryan in his Eid al-Fitr sermon at the Mohammed al-Amin Mosque in central Beirut.

Daryan warned that encroachment on the PM's jurisdiction “does not only entail disregard for the hierarchy of the constitutional institutions and the rights of one of Lebanon's main sects, but would also create a political crisis.”

Addressing Diab, the Mufti told him that he is “entrusted with people's interests and responsible for resolving their issues and crises.”

“They are pinning their hopes on you, so do not disappoint them,” Daryan told Diab.

Urging the government to “quickly take firm measures” to “stop the collapse of the national currency,” the Mufti said the first responsibility as to the financial crisis falls on the shoulders of the political forces, the second on the central bank and the third on the banking sector.

“It is the ruling trio, which has destroyed the money of citizens and their lives and livelihood,” Daryan added.

no masques and no physical distancing; the people on the photos are all mega idiots.

Daryan is playing the same Game that Geagea once played with Aoun! Wow soooo Original! Lol... Losers of Mustaqbal now using the mufti to try to get closer to Diab. This is depressing man! Truly Sad! That didn't work when Geagea tried to turn Aoun against Basil, we all know the story...

Its a series of fiefdoms and relgiously led sects that live under one sky but split to the bone....and we should still have hope for this backward place?

Its a series of fiefdoms and relgiously led sects that live under one sky but split to the bone....and we should still have hope for this backward place?