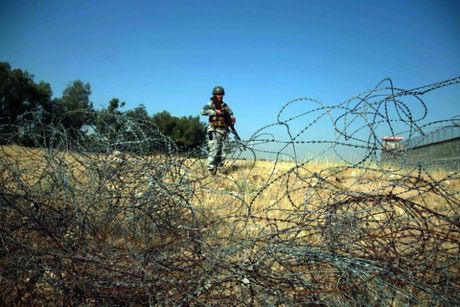 A surprise Taliban ceasefire appeared to be holding for a second day Monday as authorities planned to release up to 2,000 insurgents held by security forces.

The Taliban made the three-day truce offer to mark the Eid al-Fitr holiday that started Sunday -- a move swiftly welcomed by the government, which reciprocated by announcing plans to free insurgent prisoners.

President Ashraf Ghani said the government was also ready to hold peace talks with the Taliban, seen as key to ending a nearly two-decade-long war in the impoverished country.

"The ceasefire is holding. There have been no reports of any violation so far," National Security Council spokesman Javid Faisal told AFP.

"We hope this will eventually lead to a lasting peace that the people of Afghanistan so much desire and deserve."

Faisal said the authorities plan to release the insurgents in batches of 100 daily, with the first group of inmates to be freed later Monday.

"The release process will continue with 100 prisoners each day until the 2,000 count is reached," Faisal said.

In the northern city of Kunduz, attacked just days ago by the Taliban, calm prevailed as residents celebrated Eid.

"Just two days ago panic had set in the city," said Atiqullah, a shopkeeper from Kunduz.

"Today, you go out and feel as if there is no more fighting. People are actually celebrating Eid."

"There was non-stop fighting every single day, but since the ceasefire was announced not a single shot has been fired," said Haji Lal Agha, the provincial police chief.

"It is especially good for the residents of Trinkot who would hear the sound of gunfire every day," he added, referring to the provincial capital.

There were no reports of fighting from Kandahar, once a bastion for the Taliban, and the southeast province of Khost was also peaceful, police said.

Violence had escalated since the Taliban signed a deal with Washington in February to withdraw all US forces from the country by early next year.

The agreement also set the stage for intra-Afghan peace talks and stipulated that the government would first release up to 5,000 Taliban prisoners, while the militants would free about 1,000 national security.

Before Sunday's announcement to free up to 2,000 Taliban prisoners as a "goodwill gesture", Kabul had already released about 1,000 Taliban inmates while the insurgents had let go roughly 300 Afghan security forces members.

The Taliban insists that Kabul must release 5,000 of its members as agreed in the deal with the US.

"This process should be completed in order to remove hurdles in the way of commencement of intra-Afghan negotiations," a Taliban spokesman Suhail Shaheen said on Twitter.

Since the US invasion of Afghanistan in 2001 there has only been one other ceasefire -- a three-day pause between the Taliban and Kabul, also marking Eid, in 2018.

That ceasefire was initiated by Ghani.