No Masking It: Biden Eyes Stark Contrast with Trump over Virus 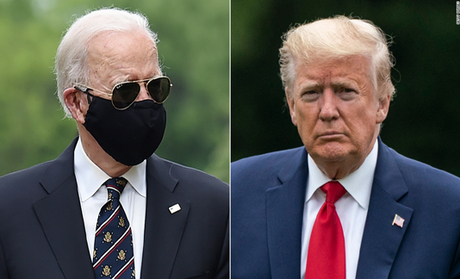 Joe Biden squared off with Donald Trump on Tuesday over the wearing of masks one day after the White House challenger emerged from coronavirus-imposed lockdown donning one while the president attended two events bare-faced.

By wearing a mask at a Memorial Day ceremony in Delaware -- and by changing his Twitter profile to a photograph of him donning the black covering -- Biden signalled he is putting the coronavirus front and center during the US presidential race in a nation increasingly divided over the pandemic.

After the president mocked him for his protective mask, Biden hit back, blasting Trump as an "absolute fool."

It appeared to mark a new front in the war of words between the rival politicians.

Instead of wearing a mask, he offered a defiant posture that has inspired some supporters, infuriated critics and poured fuel on the fiery debate about how to respond to the disaster.

The images frame the stark contrast between an incumbent who wants to move on from the crisis, and a Democrat highlighting his trust in science and criticizing the president for a bungled, inadequate pandemic response.

They also encapsulate a glaring political divide over how to respond to the deadly outbreaks and whether US states should fully reopen now or maintain lockdown status.

Throughout the three-month crisis Trump has been bare-faced in public, and on Monday the president attended two ceremonies uncovered, even as aides, military personnel and guests wore masks or face shields.

Biden, whose public appearance Monday was his first since March, made a point of covering up. He and wife Jill Biden wore black masks over their noses and mouths as they laid a wreath at a veteran's memorial near their home city of Wilmington.

Trump retweeted a message that showed an AFP picture of Biden in his mask and sunglasses with commentary that mocked the look, even as Trump's own government advises wearing masks to slow the virus's spread.

Biden's response? "He's a fool, an absolute fool, to talk that way," Biden told CNN. "Every leading doc in the world is saying you should wear a mask when you're in a crowd."

Doing so "projects as leadership," Biden added. "Presidents are supposed to lead, not engage in folly and be falsely masculine."

Trump knows Americans are seeing the pandemic differently, and that the divide is largely partisan.

New data reported on by US media shows that the deadly impacts of coronavirus have been disproportionately felt in areas of the country that voted Democratic in 2016, like the coasts and big cities.

Several Republican-leaning areas meanwhile have been less seriously affected, deepening a partisan divide not just over how to respond to the crisis, but perception of its impact.

The mask itself has emerged as a political flashpoint.

By contrast, Trump is heavily supported by blue-collar white men, and "they regard the mask as a sign of weakness," University of Virginia political science professor Larry Sabato said.

As the country approaches the dreadful milestone of 100,000 deaths caused by COVID-19, and with some 38.6 million Americans made jobless by the crisis, Trump is intensifying his push to jumpstart the US economy.

He went on the attack last weekend, firing off blistering tweets against Biden and other critics, promoting debunked conspiracies and warning that mail-in ballots will lead to a "rigged election," the latter earning him an "unsubstantiated" flag by Twitter.

On Tuesday, Trump questioned why Biden would wear a mask outdoors, in "perfect conditions, perfect weather," while he does not wear a mask in his home with his wife.

"So I thought it was very unusual that he had one on," Trump said at the White House.

Trump is gambling that his call to swiftly end lockdowns will win over undecided voters.

But May polling has shown that a majority of Americans worry that states are opening too quickly.

Meanwhile on Tuesday, Biden won the endorsement of the AFL-CIO, the nation's largest collection of labor unions.