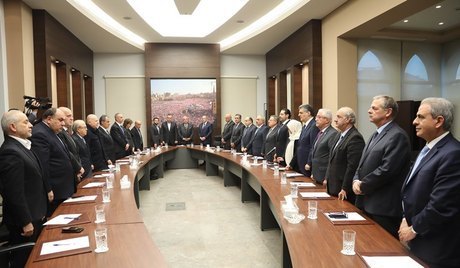 Al-Mustaqbal parliamentary bloc rejected the recent calls for federalism and the attempts to "overthrow" the Taef Accord.

The bloc, which convened at the Center House on Tuesday in a meeting chaired by former PM Saad Hariri, issued a statement afterwards.

First: The bloc stressed the necessity of getting out of the state of frustration and confusion in approaching economic and financial solutions, and moving to a new stage of dialogue with the International Monetary Fund, which expects one position from the Lebanese government and a clear practical program that is not subject to political discretion and the personal agendas of some of the ruling parties and political forces.

The bloc warned that the dialogue with the International Monetary Fund must not be stalled under the pretext of preventing domination over the sovereign economic decision and other arguments that are not in the interest of the Lebanese economy.

The bloc considered that the government’s confusion is one of the negative signs that do not suit the urgent need for courageous and responsible initiatives that contribute to curbing the financial and socio-economic deterioration, and reducing the outrageous price hike affecting all Lebanese without exception.

The inventory of achievements that the government submitted 100 days after its formation has been the subject of criticism by most analysts and observers, including the parties that provide political coverage to the government and its plans.

The government still considers the wishes as being accomplishments. It also acts as if the headlines of economic advancement that were mentioned in the reform paper and the ministerial statement of the previous government, including the program of the CEDRE Conference for investment in infrastructure, the national anti-corruption strategy and other reform steps, were the brainchild of this government and its achievements.

Second: The bloc noticed an escalation of the political debate around slogans and proposals that have become remnants from the past, and there is no point of evoking them at this delicate stage in the country's history.

What is being said in some partisan and sectarian circles about federalism and other issues, brings the country back to the atmosphere that formed, for many years, a fertile ground for civil discord, the collapse of the state and the division of its institutions.

The bloc emphasizes its firm rejection of these proposals and warns against the dangers of any call to overthrow the Taef Agreement and the Lebanese formula that established the independence state and preserved coexistence among the Lebanese.

The national formula that emerged from the pillars of independence, just like the formula of national entente, are two bright signs in the history of Lebanon, that we should not deny under any circumstances, or consider them a historical mistake that can be erased.

Third: The bloc is not surprised by what was mentioned by former President General Emile Lahoud, and the accusations he made against Prime Minister Rafic Hariri, because he suffers from chronic hatred against the martyr Prime Minister and lives in a world of illusions and allegations.

The bloc hopes that General Lahoud would recover from this, and regrets that his fabricated account coincides with the anniversary of liberation and the withdrawal of the Israeli enemy forces from the Lebanese territory, which will remain a symbol of the unity of the Lebanese in facing the occupation and its plans.

Fourth: The bloc calls on everybody to respect the preventive measures taken in the face of the corona pandemic and wishes recovery to all, especially in the regions that recently witnessed a rise in the number of cases in Majdel Anjar, Central Bekaa, Iqlim Kharroub, Akkar and other regions.

Fifth: The bloc denounced the decision issued by Beirut Implementation Department regarding the imposition of a precautionary seizure of the property of MP Hadi Habeish. It considered the decision a political one unprecedented in the justice palace.

In this context, the bloc wished that the cases committee at the Ministry of Justice, which interfered in this affair in violation of the law, would reconsider its decision and restore the right of the state from those who robbed it and are still stealing its money and squandering it, who assaulted its army and security forces and killed their officers, instead of entering in a personal dispute between a deputy and a lawyer on the one hand and a judge on the other one, which is not the first one in justice palaces and will not be the last.

Sixth: The bloc discussed the parliament’s agenda and the draft laws put forward for Thursday’s session, especially the amnesty law submitted by the bloc’s president, Bahia Hariri. The bloc hoped this law would be approved because it would close a period turn a page of conflicts in which the Lebanese were involved that led to actions that violated the law. There was some injustice towards some people, in addition to the fact that overcrowded prisons have turned into places that do not respect the most basic human rights.

The bloc also discussed the “Capital Control” draft law. It reiterates that addressing this issue should be based on preserving the depositors' funds and protecting them. The bloc believes that the proposed draft law needs more discussion and a more detailed study in the parliamentary committees.

Seventh: The bloc congratulates the Lebanese in general and the Muslims in particular on the occasion of Eid Al-Fitr and hopes that the corona pandemic would end and that we find solutions to the crises in Lebanon that exhausted the Lebanese.

Harriri! you don't represent me anymore and nor a lot of many people anymore... I believe most of the people want Federalism... but you and the other corrupt gangs want the failed Taif (more correctly meaning, the Quota system)