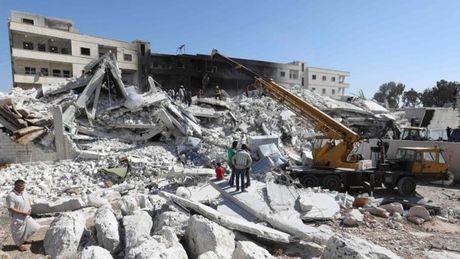 Six jihadists were killed Wednesday in an explosion that hit their arms depot in northwest Syria while Russian warplanes flew overhead, a war monitoring group said.

The Britain-based Syrian Observatory for Human Rights did not say if Russia was behind the blast that killed the non-Syrian jihadists allied with the Turkistan Islamic Party, a Uighur-dominated jihadist group.

"We don't know if it is the result of aerial bombardment or an explosion inside the warehouse," Observatory head Rami Abdul Rahman said.

If confirmed, it would mark the first Russian strike on the Idlib region since a ceasefire went into effect in March.

A Russian-backed regime offensive between December and March displaced nearly a million people in the northwest, but at least 140,000 have returned since a ceasefire went into effect, according to the United Nations.

The truce, which coincided with the novel coronavirus crisis, had put a stop to the relentless air strikes by the regime and Russia that killed at least 500 civilians in four months.

Wednesday's explosion hit an arms depot in the al-Taybat village near the town of Jisr al-Shughur, which is controlled by the HTS-allied Turkistan Islamic Party, the Observatory said.

Russian warplanes were flying overhead at the time of the blast, it added.

Nearly half of Idlib's population consists of Syrians displaced from other parts of the country.

The war in Syria has killed more than 380,000 people and displaced nearly half of the country's pre-war population since it started in 2011.

While a ceasefire in Syria has reduced combat between rebels and government forces, mercenaries from the two sides are still fighting in Libya on behalf of their Russian and Turkish backers.

UN experts estimated that up to 5,000 Syrian mercenaries may be in Libya, including "those fighters recruited by Turkey in support of the" UN-recognised Government of National Accord.