As U.S. Cities Simmer, a Leadership Test for Trump 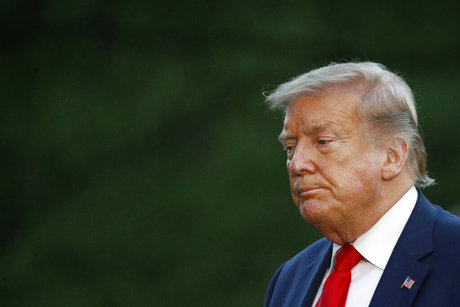 Lurching from tough talk to empathy and back again, with one eye firmly on his voter base, Donald Trump seems unsure what tone to strike as America is convulsed from Minneapolis to Los Angeles by furious anti-racism protests.

After a sixth night of at times violent unrest that saw chaotic scenes unfold right outside the White House, Trump made clear in an early morning tweet where his focus lies: "NOVEMBER 3" -- date of the presidential election.

For days the U.S. leader has been sending conflicting messages, as anger flared in dozens of American cities over the death of George Floyd, the 46-year-old come to symbolize the scourge of police brutality towards African Americans.

Since Trump returned from Florida to the White House Saturday night, Washington has been expecting a presidential address -- perhaps a message of unity -- to a nation already battered by the 100,000 lives and 40 million jobs lost to COVID-19 and now facing its most sweeping civil unrest in decades.

But instead the Republican leader has hunkered down, unseen and unheard throughout Sunday, but for a series of eruptive tweets berating the media and Democratic officials for their supposed lack of resolve toward protesters.

The image, late Sunday night, of exterior lights going dark at the White House -- while blocks away protesters set fires and smashed windows -- seemed to say it all about a president cut off from his fellow Americans.

And there was no indication of a change of heart Monday by the president, who still had no public events scheduled.

"A national Oval Office address is not going to stop Antifa," the president's spokeswoman said Monday, referring to the far-left activist network Trump accuses of spearheading the violence of recent days.

Election plug aside, Trump's other morning tweets seemed less aimed at restoring calm than at firing up his base.

One quoted a Fox News host denying that white supremacist groups had played a part in stoking unrest.

Another lashed out at Democratic rival Joe Biden, claiming he was surrounded by members of the "Radical Left" who were "working to get the Anarchists out of jail, and probably more."

- The shadow of Charlottesville -

In a call with state governors on Monday -- excerpts of which were reported by U.S. media -- Trump urged them to get much tougher on protesters.

"If you don't dominate, you're wasting your time," he was quoted as saying. "They're going to run over you. You're going to look like a bunch of jerks."

"I've been extraordinarily concerned about the rhetoric that's been used by you," Pritzker reportedly said. "It's been inflammatory."

On Sunday the Democratic mayor of Atlanta, Keisha Lance Bottoms, called out what she said was a dangerous lack of presidential leadership.

"He speaks and he makes it worse," she said. "This is like Charlottesville all over again."

The reference was to Trump's now-infamous response to the deadly violence pitting neo-Nazis against counterprotesters in the Virginia city in 2017 -- when he declared there to be "very fine people on both sides."

While Trump's comments back then drew condemnation even within his own camp, the Republican Party has had little to say on his response to the death of the unarmed Floyd, who pleaded for his life as a white police officer knelt on his neck.

One exception was Tim Scott, the only black Republican senator, who criticized Trump for what he said were "not constructive tweets, without any question."

The president's last public comments on the spreading unrest -- delivered at the Kennedy Space Center in Florida -- showed the competing impulses at work as he flickered between empathy, finger-pointing and a tough law and order message.

Trump denounced Floyd's death in Minneapolis as a "grave tragedy" that "filled Americans all over the country with horror, anger, and grief."

"I understand the pain that people are feeling," the president said.

But from there he pivoted to the role of "anarchists" in fomenting unrest, while sidestepping the core issue: police brutality and the anger of a black minority for whom Floyd's last words have become a rallying cry: "I can't breathe."

Trump's predecessor Barack Obama, for his part, published an op-ed article in which he spoke out against violence "putting innocent people at risk -- but also warned not to reduce a millions-strong movement to the excesses of a "small minority."

"The overwhelming majority of participants have been peaceful, courageous, responsible, and inspiring."

"They deserve our respect and support, not condemnation," Obama added -- in a pointed message to his successor in the White House.

Trump is going to be the last of the white privileged right-wing racist Zionist pandering crony imperialist capitalist because he represents a decreasing minority. The alliance of the increasing people of color with young people and progressives will rule America in the future. America is seriously indebted which will dramatically increase and will effect the living standards of ALL Americans. The American Empire is falling and with it all its proxies..

Thank you Trump! Thanks for isolating America in the world and showing that the US is a racist government who is there only to steal the world resources (as Trump stated in Syria) and ONLY cares about its wealthy crony capitalists including Zionist right wing billionaires like Sheldon Adelson. No wonder Putin likes Trump. He knows he would be a disaster for the US. Next is the ethnic cleansing racist Zionist entity that will be isolated and those who collaborated with this terrorist settler colonial expansionist state.