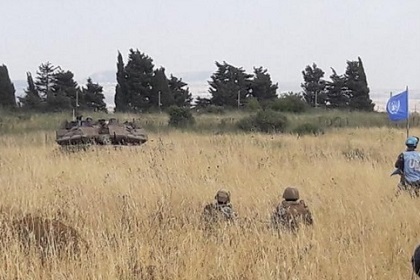 Tensions surged Tuesday afternoon in the southern border area of Adaisseh after an Israeli force advanced into an area claimed by Lebanon.

Al-Manar TV meanwhile said that “three Merkava tanks and a personnel carrier carried out a significant maneuver in the occupied part of the Lebanese town of Adaisseh near the Miskav Am settlement.”

“Two tanks crossed the electronic fence and staged provocations by stirring heavy smoke in the face of the Lebanese Army and UNIFIL forces,” al-Manar added.

“The infantry force scoured and combed the aforementioned area without breaching the Blue Line, as the Lebanese Army went on alert and brought a number of military vehicles,” NNA said.

The agency added that a UNIFIL-affiliated team also arrived on the Israeli side of the border in a bid to diffuse the standoff.

“After strong explosions were heard echoing throughout the border towns, it turned out that the enemy was carrying out a military drill along the border,” NNA said.

Without crossing the Blue Line. So what exactly is the problem?

It was the smoke that bothered our elite battle hardened pos soldiers.

lol they readied the white flag and each prayed the God he believes in!

This time he will be heading to the Iranian embassy!

The French won't accept him again; there are grades in recycled paper quality beyond which it can't be recycled anymore... it has to go to Auschwitz!