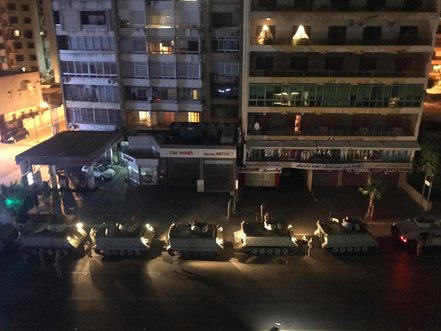 Protesters blocked roads in Beirut's Corniche al-Mazraa and Qasqas areas, in the cities of Sidon and Tripoli and on the coastal highway that links Beirut to the South.

Heavy gunfire was also heard in Beirut's Tariq al-Jedideh area as videos of gunmen shooting in the air circulated on social media. The National News Agency said two people were wounded in the area -- one lightly and one in the eye.

The insults were condemned by Sunni and Shiite religious leaderships as well as political parties.

Dar al-Fatwa, the country's highest Sunni religious authority, warned all Muslims against "falling into the trap of sectarian strife."

"The cursing of Sayyida Aisha can only come from an ignorant person who should be enlightened," Dar al-Fatwa said in a statement.

The head of the Higher Islamic Shiite Council Sheikh Abdul Amir Qabalan for his part warned of "suspicious attempts to stir sectarian strife" and condemned the insults against the Prophet's wife.

Shiite mufti Sheikh Ahmed Qabalan meanwhile urged authorities to protect the country and its people and slammed those whom he called "mercenaries and agents" who are trying to "ignite national and sectarian strife."

"The insults and chants that were voiced by some individuals are rejected and condemned and do not at all reflect the moral and religious values of the faithful Muslims," Hizbullah said in a statement.

It also strongly cautioned against "those who stir strife, those who benefit from it and all those promoting it and calling for it."

Hariri for his part urged supporters and residents to heed Dar al-Fatwa's warning against sectarian strife and noted that Shiite religious and political leaders have also condemned the insults against the Prophet's wife.

The insults were reportedly hurled during or after the confrontations in downtown Beirut on Saturday between protesters and counter-demonstrators.

Ashraf el ness terrorizing the nation again with their weapons of terror.

"The insults and chants that were voiced by some individuals are rejected and condemned and do not at all reflect the moral and religious values of the faithful Muslims," Hizbullah said in a statement.

lol and who indoctrinated these thugs and taught them these insults except hezbollah and its wilayat al faqih?

As I've long observed this is not a country anymore. It's a jungle. nNo one respects any law, authority, or otherwise. They don't respect each other, every single one has a weapon. Family names control small towns and regions, they fight each other with rocket grenades (see Bablebck few days ago). I swear this looks like back in 746 rather than 2020.