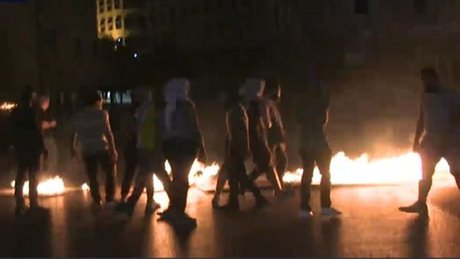 Protesters took to the streets across Lebanon on Thursday as reports said the dollar was selling at at historic rate of LBP 7,000 on the black market.

The protesters blocked most of the country's roads in scenes reminiscent of the October 17 uprising.

In central Beirut, protesters rallied outside the headquarters of the Association of Banks before blocking the Saifi road and the iconic Ring highway. The Ring protesters were later joined by young men who arrived from Khandaq al-Ghamiq and other areas on scooters, sparking joint chants against sectarianism.

Roads were also blocked in Beirut's southern suburbs and in the capital's Salim Salam, Corniche al-Mazraa, Qasqas and Verdun areas. The road was also blocked outside the central bank in Hamra.

Shops and companies had earlier closed in the Barbir, Maqased and Mazraa areas in Beirut “in protest at the hysterical rise in the dollar exchange rate and their inability to continue running their businesses,” the National News Agency said.

They also hung banners condemning the economic and social situations.

The traders associations of Tripoli, Akkar and Baalbek meanwhile called on businesses to close on Friday in protest at the unprecedented rise in the unofficial dollar exchange rate.

The dramatic collapse of the Lebanese lira coincides with a currency crash in neighboring Syria, amid reports that the two financial situations are affecting each other.

Lebanon is in the grips of its worst economic turmoil in decades, and holding talks with the International Monetary Fund towards securing billions in aid to help overcome it.

The Lebanese pound remains pegged to the U.S. currency at a rate of 1,507 per dollar, but its value has tumbled on the black market in recent months.

The new nadir comes despite government pledges to halt the pound's devaluation, and the money changers' union issuing a maximum daily buying rate of 3,890 and selling rate of 3,940.

Lebanon's economic crunch has caused poverty to soar to 45 percent of the population and unemployment to rise to 35 percent.

It has also sparked steep inflation, including on imported products.

International Crisis Group on Monday warned that Lebanon needed "emergency external assistance to ward off the worst social consequences of the crisis."

Lebanon, whose debt equivalent to more than 170 percent of gross domestic product (GDP) is one of the world's largest, defaulted for the first time in March.

isn't it strange that tonight neither the police or army are doing anything? usually they open blocked roads straight away but tonight?
strange....

he is just someone satisfied with the present conditions of lebanon....he doesn't want to change a thing.

Hey Idiot: You think that US Israeli policy has no effect on the LBP?

30 years of corruption with the blessing of your friends did most of the damage... don't deflect and throw the blame elsewhere when the lebanese political caste is entirely responsible...
billions and billions stolen by politicians is because of the US and israel? LOL

READ: I said no effect. Off course corruption MOSTLY by Jumblat and M14 leaders is mostly to blame.

I am not opposed if this government falls. I am trying to explain to those who think that aligning with Israel will bring Lebanon great results.

not aligning with israel nor anyone else of course, but aligning with iran and syria is not ok too!
and corruption is NOT MAINLY because of M14, but because of ALL the politicians! if M8 never benefited from it they would have fought it min zamen!

I am saying that Lebanon should have good relations with all governments except Israel who is our ONLY enemy. Lebanon should ACCEPT any support to resist the Israeli enemy. I do not care if the leadership of Iran or any other country that supports the Lebanese resistance is a democracy, a monarchy, or Marxist. You need a lot of explanations to understand what I am saying and I really do not have the time.

lebanon should have good relations yes true but not be the slave of syria and iran like M8 led lebanon to be...
but a true sovereign country relies on its army not a militia to defend it! hezbollah deprived lebanon from its sovereignty and made it a lackey to syria and iran.

Our LAF (government) takes orders from western countries like the US and is not ALLOWED to have the weapons to deter Israeli aggression. Lebanon is NOT a true sovereign country. If it was a normal government it would have resisted Israeli aggression, invasions, and incursions. Good night.

@peace has no arguments against the Truth. @bigjohn has nailed it, if America had the chance it would have done to Lebanon same it did with Palestinians. Israel's surname is UNITED STATES OF AMERICA.

I love those pretending to love lebanon but entrusts its security to a foreign militia paid by iran....and put no trust in their national army....in other countries it s called treason :)

@bigidiot I think that blaming Israel for our problems is simply ludicrous!
The US surely will use of its influence not to help us, but they are not to blame for our crap.
It is not the fault of Israel or the US if we don t have electricity 30 years after the war, or if Berri is still Presiding the chamber.
You keep blaming M14... clearly, you are one of those who understood nothing. They all robed us, they all cheated, they are all still doing it. But yeah..sure.. you can blame Israel for all of your personal problems... that s exactly what a clever educated person would do...

And if something is strangling us today... it is this submission to Hezbollah, to Iran, to Syria! Our politicians have licked the boots of those countries and look where we stand now! Hezbollah has plundered the customs for years!! Syria used us as one of its provinces during decades! Nasrallah wants us to go pray in Jerusalem... Who gives a s°it!! People cannot afford to pay for food.. an he wants to liberate Jerusalem!!?? Have you heard anything stupider than that!!?? No! Because you re a sheep bigidiot.. you follow your leader without doubting him..without questioning yourself.. unlike us.

“No trust in the National army”???. Maybe it has to do with the used toy weapons it receives from the US or the fact that the LAF never fired a shot at the occupying Israeli enemy troops. That is not called treason . It is called reality which you refuse to deal with.

keep believing in a militia paid by iran and not in your own state. you do not want a state you want it to be a province of iran that's all.
your excuses are no excuses! if you believed in your army you would rather ask hezbollah to be under its command and bring its expertise to it; and not obeying a foreign power instead!
what is a party that can declare war or not and does not leave that to its own state? it's treachery. go and live in iran your true state.

It is the LEBANESE resistance that is deterring Israeli aggression not the LAF who has only fired on Lebanese citizens, but NEVER fought the Israeli occupation. “bring expertise” to national Army? Then the zionists in the US will say The HA is training the LAF, which is not ALLOWED. Also, It is the weapons the LAF is not ALLOWED to have. I prefer the Lebanese resistance to protect me rather than the LAF that takes orders from pro Israeli countries. As you said, Let’s stay with the article and about mostly Lebanese corruption and the world bank that is dominated by the US

We are not quitters like you. We will change this country and we will disarm the terrorists .

Libres and little john,
We are at this junction not becuase of America or Israel but those who lead us here. Last I checked your blessed Kizb and its orange peal where those who have been leading the country for the past many years. Its not Israel nor China but your blessed Syria and Iran that got us us here. So whisht get lost no one is buying your Iranian dream but the weak and useless like you.