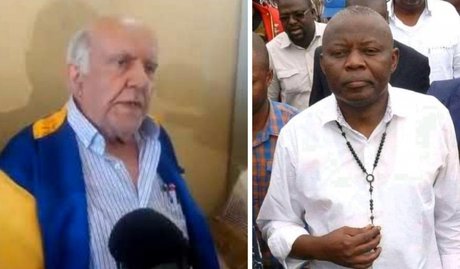 DR Congo's top court has intervened in an unprecedented corruption case involving a key ally of the president, less than a day before a lower court was due to issue a verdict, legal sources said Friday.

A court in Kinshasa is scheduled on Saturday to issue its ruling in the fast-moving trial of Vital Kamerhe, 61, a veteran powerbroker in national politics who is also President Felix Tshisekedi's chief of staff.

Prosecutors are seeking 20-year terms against Kamerhe and 78-year-old Lebanese businessman Samih Jammal, accused of siphoning off more than $50 million in a case deemed a litmus test of Tshisekedi's anti-corruption drive.

But legal sources on Friday said that the country's Constitutional Court had asked the lower court to hand over the judicial dossier "immediately."

According to the letter, signed by the Constitutional Court's chief clerk and seen by AFP, the dossier is being sought under "exception of unconstitutionality."

This is a term under the Napoleonic judicial system by which a defendant can seek to have a case suspended or annulled if judicial technicalities violate the constitution.

Neither the lower court nor Kamerhe's lawyer was able to say whether the scheduled verdict would be affected by the intervention.

The trial began on May 11, just over a month after Kamerhe was arrested.

It has no precedent in the history of the Democratic Republic of Congo, both in terms of political impact and public visibility.

Proceedings have been televised live from a court set up in Kinshasa's central prison, and the two key defendants, along with a presidential official who is the third accused, appeared in prison outfits.

In one of the twists in the case, the judge who presided over the first two sessions of the trial, Raphael Yanyi, was found dead on May 27.

Police declared the case of death was cardiac arrest. But on June 16 the justice ministry said he had been murdered, after an autopsy determined he had died from a brain hemorrhage caused by "blows" to the head.

Yanyi's family have contested the autopsy report and say he was poisoned.

Kamerhe emerged from DR Congo's civil wars in the early 2000s to become a key figure in national politics.

He was a confidant of former president Joseph Kabila, who appointed him speaker of parliament.

After coming under fire for dissenting over a policy issue, he set up his own political party and tried unsuccessfully to bid for the presidency in elections in 2011.

When presidential elections loomed in December 2018, Kamerhe and Tshisekedi struck a mutual-support deal that helped Tshisekedi to win.

After taking office, Tshisekedi appointed Kamerhe as chief of staff.

Kamerhe's supporters say the trial is a plot to prevent him from securing the presidency in the next elections in 2023 -- the quid pro quo in the 2018 deal.

Coruptiom and Lebanese? Say it ain't so!!