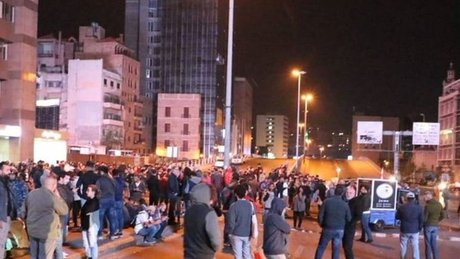 Protesters took to the streets across the country on Wednesday evening to denounce the dire economic and financial situations.

The protests come on the eve of a national meeting called for by President Michel Aoun which will be boycotted by most of the opposition parties.

In the capital Beirut, protesters blocked the Ashrafieh-Hamra lane of the vital Ring highway, which has become iconic for the anti-government protest movement. Scuffles later erupted between them and riot police, which resulted in injuries according to al-Jadeed TV.

Other protesters meanwhile rallied outside the central bank in Hamra.

Protesters in the North meanwhile blocked several roads in Tripoli as well as the al-Mhammara and Halba roads in Akkar.

In Mount Lebanon, the Bhamdoun road was blocked at the Shanay intersection and in the south, protesters blocked the road outside the serail of Nabatieh and the Elia intersection in Sidon.

Dozens of protesters meanwhile rallied in the southern city of Tyre, chanting against banks. "They are selling their nation for the sake of the dollar," the protesters chanted, addressing private banks.

Integration of the Meca refugies is the demand of usa+israel+Meca!!! All politicals that demands the return of the 2 millions of Meca refugies gonna be persecuted by the evil coligation to destroy the catholics political..

I'm beginning to think you maybe a camouflaged Iranian mole, why else would you persist on inciting religious tensions in Lebanon with every comment you make.
Ostensibly, you remarks appear anti-Muslim. Though under a thin veneer they always target suing hatred in the minds of Lebanese Christians against the US.
Hm...

If lebonan is first then a president Cristian... A head of cabinet and parliament Cristian too!!!

The slogan is... Integrated the Mecca refugies then USA and Mecca liberated the money...