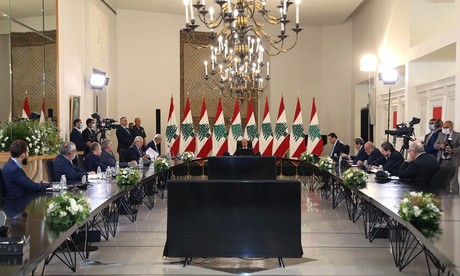 A “national unity” meeting in Baabda kicked off on Thursday in the presence of the Lebanese government and its internal allies, and the boycott of opposition parties, as protesters gathered on the road to the Presidential Palace chanting slogans against the ruling authority.

The meeting, which came at the request of President Michel Aoun, meant to safeguard “civil peace,” was boycotted by leaders of the Christian parties opposed to the presidential term including the Lebanese Forces, Kataeb, Marada.

A tripartite meeting between Aoun, Berri and Diab preceded the meeting.

In response to a question, Speaker Berri renewed calls for the immediate declaration of a state of financial emergency in Lebanon.

They went for the food--they stayed for the pictures

So, another typical day for the worthless government.

Mbala they did something, they spread the corona virus .