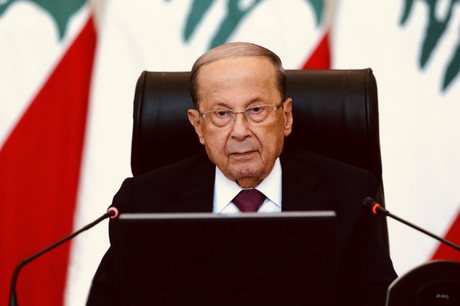 President Michel Aoun said the meeting he invited Lebanese officials to on Thursday bears a major “protection of stability and civil peace”, mainly after the recent developments in the country.

“I was hoping that all the country’s parties and political forces would join us because civil peace is a ‘red line’ and all the wills are supposed to converge in order to reinforce it, since it is the responsibility of everyone and does not solely befall one individual, no matter how highly he is ranked, neither one party, nor one actor,” said Aoun at the beginning of a “national unity” meeting at the Presidential Palace.

“What happened on the streets in the past weeks, especially in Tripoli, Beirut and Ain el-Rummaneh, must sound the alarm for us all to sense the security dangers that have tried to ignite sedition by pulling the trigger of social demands. And it seemed obvious that some were using the people’s anger and legitimate demands to sow violence and chaos, in view of fulfilling suspicious external agendas while scoring political gains for internal parties,”he added.

We have alarmingly had a brush with the atmosphere of civil war and movements were suspiciously launched, loaded with confessional and sectarian feud and mobilizing emotions; moreover violence, violation of public and private properties, contempt against religions and abusive language have been portrayed as a legitimate right for the perpetrators.

The President added: “In view of such an unprecedented chaos, I had to call for this inclusive national meeting to put a definitive end to this dangerous security derailment.”

Stressing the need to maintain civil peace, he added saying that “political divergence is healthy and at the core of democratic life, but its ceiling remains civil peace which cannot be crossed. No matter how heated the rhetoric may be, we must not allow any spark to slip out of it, because putting out the fire is not as easy as starting it, especially if it gets out of control; and this is the responsibility of all of us, attendees and absentees alike.”

Pointing to Lebanon’s crippling economic and financial crisis, he said: “Today, our country is going through the worst financial and economic crisis, and our people are experiencing daily suffering, fearing for their lifelong savings, concerned for their future, desperate about losing their jobs and their decent living.

I say it loud and clear, no rescue is possible if some continue to easily tamper with security, manipulate the street, mobilize confessional and sectarian sensitivities.

Before the vital challenges that Lebanon is facing and amid the regional turbulence, the tall waves that are hitting our shores, and the perils that may stem from the legislation called the “Caesar Act”, unity around decisive choices is imperative.

Our aim from this meeting today is only to promote this unity and prevent chaos.”

who woke him up?