Diab at IV Brussels Conference: Save Lebanon from Repercussions of Caeser Act 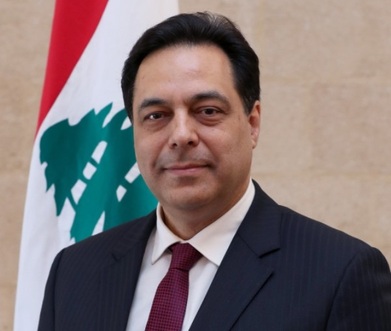 Prime Minister Hassan Diab voiced calls during the IV Brussels Conference on Tuesday, to save Lebanon from the repercussions of the Caesar Act against Syria.

"I recall on the United Nations, on European countries and on friendly nations to steer Lebanon away from the repercussions of any act against Syria mainly the Caesar Act," said Diab in Lebanon's speech at the teleconference on Supporting the Future of Syria and the Region.

Diab said that Lebanon is "determined to cooperate in order to alleviate the suffering of refugees," but noted that the presence of Syrian refugees in Lebanon immensely impacts its already stricken economy.

"Lebanon hosts a large number of Syrian refugees compared to other countries costing the economy million of dollars," he said, noting how Syrian students have been incorporated into Lebanese schools which is going to increase the pressure even more as Lebanese shift to public schools because of the economic crisis.

"Public schools in Lebanon are overcrowded as the result of receiving Syrian refugees. The pressure is expected to increase even more when Lebanese register their children in public schools as a result of the crisis," he added.

and that the government's approach is reflected in "the economic plan, and the negotiations with the IMF."

The Brussels IV conference is hosted by the European Union and United Nations.

What a tool. Instead of doing the reforms necessary to get foreign investment, he looks for another kizb scapegoat.

There’s a typo in the title, it’s cæsar act. Not cæser.