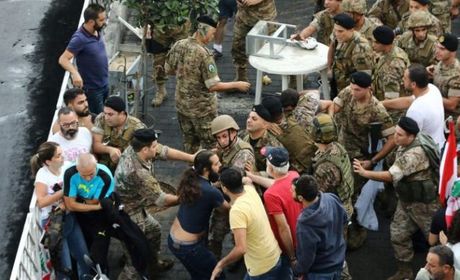 According to information obtained by a security agency in Lebanon, the upcoming days are going to observe more demonstrations and violence against the army and security forces as the economic crisis soars in the country, al-Joumhouria daily reported on Wednesday.

The Higher Defense Council’s discussions a day earlier focused on worsening economic and livelihood conditions, amid concerns raised by several security agencies of a rapid security deterioration in light of difficult living conditions pushing many to the streets, said the daily.

ISF chief, Major General Imad Othman had pointed out that the security forces have been subject to 85 attacks since the October 17 uprising, 78 of them on vehicles that were severely damaged and completely disrupted, said the daily.

A security report submitted during the meeting said it expects more demonstrations and assaults against the army and security forces in the coming days.

Protesters closed several major roads in Beirut and several regions on Tuesday amid rising anger as the currency hit a new record low on the black market, electricity cuts increased and the government raised the price of bread for the first time in more than a decade.

Demonstrators have been using large trucks to block the roads, which conferees at the HDC said “impedes” the security services work, as happened in Jiyyeh and Antelias. The Higher Defense Council decided to ban any blockage of main highways and has directed the security services to address this matter.

This is no surprise. The attutude of the Army is despicable!
Why did they not join the people yet?
Why did they not make a coup and overthrown the Goverement and the institutions already?
Why do they let Ebola act as they wish?
This army is weak, divided, secterian, infiltrated, and useless.
It has no pride, no prestige, no guts.
The Army has not anymore the back up of the people, the respect, the love..
It was not capable of taking sides when it should have. They are defending a state, a system, that is corrupted and incompetent. To hell with it!

The protest have accomplished absolutely nothing. As a matter of fact, things have gone from bad to worse. Enough already, they need to focus thier anger on the thieves. The protesters know who they are, where they live, so go to their homes which were purchased with your money, and pull them out and lock them up and demand the ICC take charge of them. Have them judged by international judges as we all know our judges are corrupt to the core. DO what MBS did...