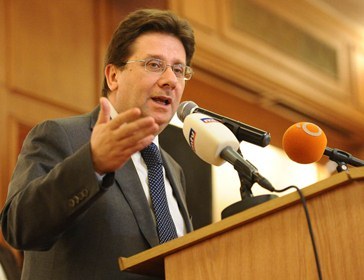 MP Ibrahim Kanaan, the head of the Parliamentary Finance and Budget Committee, announced Wednesday that the Lebanese state is “not bankrupt,” as he disputed the figures declared by the government on the defaulted loans.

“The State cannot be considered bankrupt as long as its assets and properties are available,” Kanaan said at a press conference.

“It has turned out that there is a difference of LBP 26 trillion between what the government is presenting and the reality of the defaulted loans,” the lawmaker added.

“There is a wrong strategy, seeing as the government, the central bank and those concerned locally must talk to each other before talking to the International Monetary Fund to see what it wants,” Kanaan lamented.

Noting that the parliamentary committee “has not and will not take sides in the dispute between the government and the central bank,” the lawmaker also stressed that the committee is not the “Banks Party”.

“We have not discussed their plan, we have rather discussed the government’s plan with them, is this a crime?” he added.

That's great news!! The economy is in good shape after all!!

When I read this, this old song came to my mind...