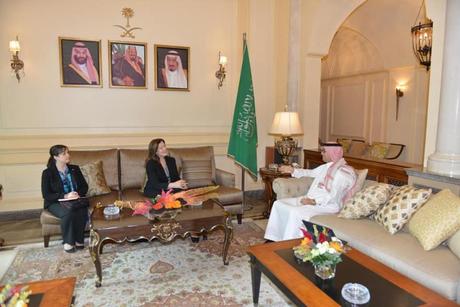 Saudi Ambassador to Lebanon Walid Bukhari on Wednesday held separate meetings with the ambassadors of the U.S., the UK and the UAE -- Dorothy Shea, Chris Rampling and Hamad al-Shamesi.

The meetings were held at Bukhari’s residence in Yarze.

A terse statement issued by the Saudi embassy said the talks tackled “the latest political developments and issues of common interest.”

Information obtained by LBCI TV said “the U.S. ambassador’s visit to the Saudi ambassador is aimed at unifying stances and coordination.”

It also aims to “stress the two countries’ keenness on Lebanon and its stability and economy, far off from the claims that say that the sanctions are targeted against the Lebanese economy,” the unnamed sources said.