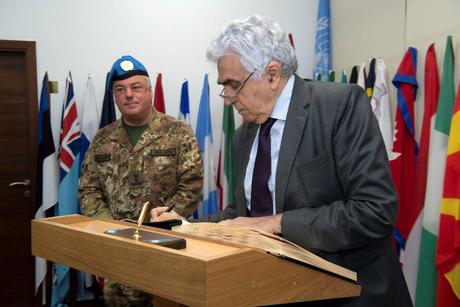 Foreign Minister Nassif Hitti on Wednesday visited the UNIFIL Headquarters as well as the Mission's area of operations and the Blue Line in south Lebanon, accompanied by over 30 young Lebanese diplomats.

A UNIFIL statement said Hitti made the visit to "see first-hand the work carried out by the Mission in coordination with the Lebanese Armed Forces (LAF) in stabilizing the situation on the ground for almost 14 years."

UNIFIL Head of Mission and Force Commander Major General Stefano Del Col welcomed the Minister and his delegation at the UNIFIL Headquarters, and briefed them on various aspects of the implementation on the U.N. Security Council resolution 1701, which forms the core of UNIFIL’s mandate.

During his briefing, the UNIFIL head stressed unreservedly on "preserving the sanctity of the Blue Line," the statement said.

He added that UNIFIL presence along the 120-km line has been an essential element in assisting the parties to reduce potential frictions, de-escalating situations as well as decreasing tension that could have jeopardized the cessation of hostilities.

Major General Del Col also called for “sufficient prior notification from both sides of any activity along the Blue Line and to fully utilize UNIFIL’s liaison and coordination mechanism to mitigate the scope for any apprehensions and misunderstandings.”

“Our focus is on maintaining calm and stability along the Blue Line in accordance with UNIFIL’s mandate and the parties’ obligations under resolution 1701, and all our efforts must be directed towards attaining this goal,” said the UNIFIL Force Commander. “I ask for your continued support in this regard.”

He assured that despite the COVID-19 crisis, UNIFIL’s activities continue at normal levels.

The Minister later carried out an aerial tour of the Blue Line, while another part of the delegation visited a section of the Blue Line at a UNIFIL Ghanaian contingent base near the south-western Lebanese village of Ramyah.

He remarked that the visit confirms Lebanon’s commitment to international legitimacy, represented by the United Nations and through the role of UNIFIL, in maintaining security and stability in southern Lebanon.

“The Government has affirmed Lebanon's commitment to all provisions of U.N. Security Council resolution 1701 and to supporting the role of UNIFIL in the south,” said Minister Hitti.

Hitti’s visit, his first since being appointed to the post in January, follows that of Prime Minister Hassan Diab to the UNIFIL Headquarters more than a month ago during which the latter reaffirmed the importance of the continued coordination and close cooperation between UNIFIL and the Lebanese Army, thereby facilitating the UNIFIL’s mission.