Gemayel: Improving Ties with Arabs, West Can be Alternative to IMF 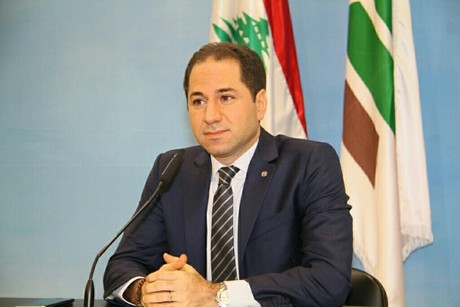 Kataeb Party leader MP Sami Gemayel on Sunday noted that improving Lebanon’s strained ties with Arab countries and the West could be an alternative to the floundering negotiations with the International Monetary Fund.

“But is the Lebanese state capable of visiting Washington, Saudi Arabia, the UAE or Europe?” Gemayel lamented in an interview with Radio Orient.

“The government is absent and the President has not addressed the Lebanese even amid major crises, from coronavirus to the lira collapse to the all-out collapse, and this is a strange thing,” Gemayel decried.

He pointed out that Hizbullah has burdened the entire population with “the responsibility of a conflict it has nothing to do with.”

“The people did not decide to engage in a conflict with the West, the Arab countries or the international community,” Gemayel said.

Noting that “the government is a constitutional front for Hizbullah’s control of Lebanon,” Gemayel said Saad Hariri’s government was ousted without any violence during the first days of the October 17 uprising.

Criticizing Hizbullah’s approach and policies, the Kataeb leader said the Iran-backed party wants the people “to maintain a state of alert and defiance while the norm should be stability.”

“We cannot live 40 or 100 years of resilience and confrontation because the people will eventually grow tired,” Gemayel said.

“All countries in the world ask their peoples to be resilient, but resilience must be the exception, seeing as if you ask them to practice resilience for 90% of their lives, this is no longer a culture” of life, Gemayel added.

Hezbollah will not grant the government permission to establish closer ties to the US and EU. It is therefore not an option.

The whaabis monarchies do not want that Lebanon approximated to the European catholics Nations... They prefer put Lebanon in fire