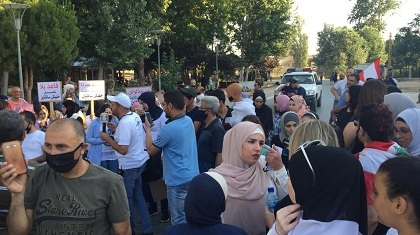 Hundreds of activists gathered Saturday afternoon in several Lebanese regions protesting the crumbling economy and demanding the resignation of the government.

In Riad el-Solh Square in downtown Beirut protesters brandished Lebanese flags and banners affirming their continued movement until their demands are met.

They first marched towards the Association of Banks and then to the Central Bank of Lebanon.

Demonstrators chanted slogans against the government condemning the dire economic and living conditions calling for "the resignation of the government" and "holding the thieves and the corrupt accountable, recovering the looted money, and conducting early parliamentary elections."

In the southern city of Nabatieh, groups gathered outside the Central Bank chanting slogans against the authority.

In Baalbek protesters brandished white flags as a symbol of their white protest.