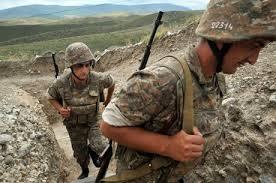 Azerbaijan's defense ministry said Armenia's "offensive" from its northern Tavush region was met with a "counterstrike" and retreated.

Yerevan, on its part, accused Baku of "using artillery in an attack aimed at capturing (Armenian) positions."

"They were repulsed, suffering losses in manpower. There were no casualties among Armenian servicemen," Armenia's defence ministry spokeswoman, Shushan Stepanyan, said in a Facebook post.

The two former Soviet republics have for decades been locked in a simmering conflict over Nagorny Karabakh, a breakaway territory which was at the heart of a bloody war in the 1990s.

The Sunday clashes however were far from Karabakh, and directly between the two Caucasus states.

Since the fragile 1994 ceasefire, peace talks between Baku and Yerevan have been mediated by the "Minsk Group" of diplomats from France, Russia, and the United States.