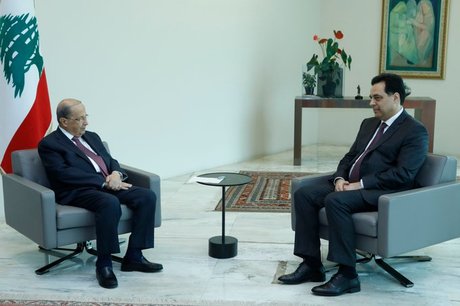 President Michel Aoun on Tuesday cautioned that “the resurgence and spread of the coronavirus pandemic requires the review of some measures and stricter implementation of the precautionary instructions.”

Speaking at a Cabinet session, Aoun also stressed the need to “put into action the measures stipulated in the financial and economic rescue plan, especially those related to reforms and slashing expenditure in order to curb the deficit.”

Prime Minister Hassan Diab for his part lamented that “obstacles are increasing and political exploitation is turning into a profession of falsifying realities and concealing facts.”

“We are bearing all of this and more, but unfortunately some have gone too far with this behavior. When these people try to obstruct any assistance to Lebanon, what would they be doing?” Diab decried.

He added: “You know that the contacts with our brothers in Iraq, Kuwait and Qatar, and our friends in the world, are witnessing positive and encouraging improvement towards helping Lebanon. We are fighting tooth and nail to alleviate the country’s crisis, whereas some people are still insisting on increasing the suffering of the Lebanese.”

“Is it reasonable for any political official who has a patriotic conscience to try and block assistance to Lebanon in these circumstances? Is it reasonable that there is a party official whose entire concern is to obstruct any help? This is shameful and close to national treason,” the premier added.

“What we’ve heard from our brothers in the Arab countries about contacts that were held with them by some Lebanese politicians is truly shameful,” Diab went on to say.

He also said that he has reports about “a plan to obstruct the government from inside state administrations.”

So many 'conspiracies'---surprised they don't wear tinfoil hats.

lol.... Israeli, USA or Saudi Arabia is always behind everything they say. They’re probably also the reason why Aoun is constipated.

hassuna u are z greatest.. always every one is conspiring at u. but we thought u said u have achieved 97% ! so 3% conspiracy by insiders! grow up dude..