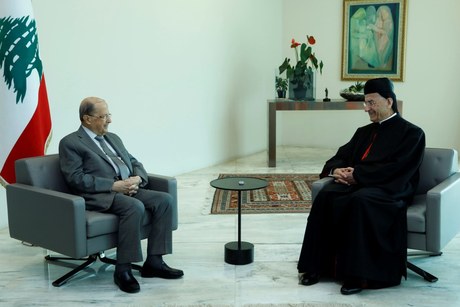 “Neutrality brings stability and growth and it would pull us out of the state that we are in today and of poverty and hunger,” al-Rahi told reporters after the talks.

“Lebanon in its nature and foundations is neutral, and when it was neutral it used to be called Switzerland of the East. Therefore Lebanon is in its structure neutral and neutrality is not against anyone,” al-Rahi added.

Asked whether his words refer to Hizbullah, the patriarch said: “I mean everyone, seeing as Lebanon must come first and loyalty must be to it.”

“A lot said that there is a dispute with President Aoun due to the issue of neutrality, knowing that the president is among the first advocates of neutrality in the concept we are talking about today,” al-Rahi went on to say.

He explained: “Neutrality is to commit to the joint Arab causes without engaging in political or military conflicts or joining axes. It is to be rather the first defender of justice, peace and understanding in the Arab causes, except for what relates to Israel.”

“Neutrality stands for a strong state and a strong army, and there is no disagreement with Mr. President over this issue, seeing as he was among the first to call for this,” al-Rahi added.

He also stressed that Bkirki supports neither the opposition nor the ruling majority.

“Bkirki is Bkirki, and if we support a certain camp we will lose our free word,” he added.

He also revealed that he clarified to Aoun that he referred to all parties, “including those who are boycotting the Presidency,” when he mentioned the issue of the “siege on legitimacy.”

LBCI TV meanwhile reported that Aoun stressed to al-Rahi that “consensus among the Lebanese components is the basis for any choice tackling the Lebanese situation.”

“National accord is the main guarantee for any solution for the Lebanese crisis,” the president reportedly added.

Al-Rahi for his part, LBCI said, explained to the president in detail his suggestions on Lebanon’s neutrality, noting that “the idea is not targeted against any part but rather aims to neutralize Lebanon from conflicts.”

Basically what AL-Rahi is saying is due to the slump in the economy and the dollar situation you need to ensure my monthly payments are tripled and in US DOLLARS only. Rahi with all due respect follow the good book and stay out of politics. You can not be a politician and a man of religion

AL-Rahi is at least starting to voice the right concerns head on, ie that Hizbullah's trying to change Lebanon's identity to match it's own foreign ideology. His last two sermons have addressed Aoun directly about this grave issue. He's been Metropolitan Elias Audiesque lately. Lets hope he stays the course.

When he gets the pay increase he will flip back to his old song and dance...

Rahi was promised to get the 2021 maybach.... then he saw there wasn’t enough money in the state coffers this year..... flip flopping today is his way to protest. As soon as the IMF replenishes our coffers, he’ll revert to his pro Iran and Aoun chants.

Both of you are responsible for Lebanon's misery.

Yes zahle... they are both responsible for letting the Ebola Cancer gangrene this country...
Ebola= No Future 4 Lebanon = Misery