Trump Warns Iran against Execution of Three over Protests 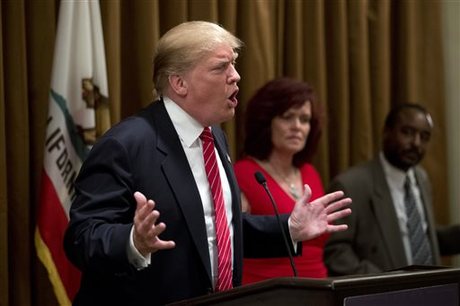 "Three individuals were sentenced to death in Iran for participating in protests," he tweeted. "The execution is expected momentarily. Executing these three people sends a terrible signal to the world and should not be done!"

Iran's judiciary said Tuesday that a court had upheld the death sentences for criminal actions during protests last November sparked by a hike in petrol prices.

Reformist Shargh newspaper named the three as Amirhossein Moradi, a 26-year-old who worked at a cellphone retailer; Said Tamjidi, a 28-year-old student; and Mohammad Rajabi, also 26.

Iran has blamed last year's violence on "thugs" backed by its foes the United States, Israel and Saudi Arabia.

Petrol pumps were torched, police stations attacked and shops looted, before security forces stepped in amid a near-total internet blackout.

A senior Iranian lawmaker said in June that 230 were killed and thousands injured during the protests.

The United States has claimed that more than 1,000 were killed.

Regime change in Iran NOW. The world can no longer wait for these old farts to rules and ruin the world.