Over 140 Detained after Anti-Putin Protest in Moscow 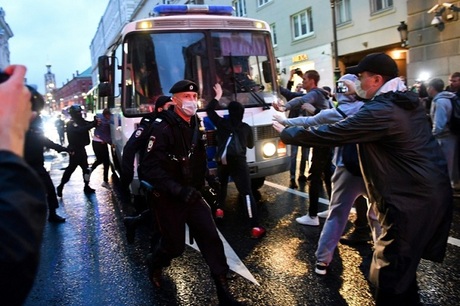 Russian police detained over 140 people including a high-profile Moscow deputy after Kremlin critics protested Wednesday against changes to the constitution, the OVD-Info monitor said.

The group, which tracks arrests at political protests, said 142 people were detained Wednesday evening. Many people including journalists were put in police vehicles, AFP correspondents said from the scene.

Yulia Galyamina, a prominent Moscow city councillor who has spearheaded a campaign against President Vladimir Putin's controversial changes to the constitution, was among those detained together with her daughter, she said on Facebook.

The constitutional changes could see President Vladimir Putin stay in power for another 16 years.

Earlier Wednesday Galyamina and her allies gathered in Moscow's central Pushkin Square despite rainy weather to collect signatures from hundreds of supporters against this month's constitutional reforms, to contest them in court.

"We are lodging a class action lawsuit," activist Andrei Pivovarov told AFP as he gathered the signatures on the steps of a statue of national poet Alexander Pushkin dominating the square.

"We are collecting signatures from across the country," he said.

Writing later on Twitter, Galyamina said they had gathered 5,000 signatures. "This is an excellent result," she said.

At one point the campaigners had to pause because they quickly ran out of paper, they said.

Some protesters brandished placards, while others chanted "Russia without Putin" and "Russia will be free."

Earlier this month Putin, 67, oversaw a deeply controversial seven-day vote that amended the constitution and now allows him to serve two more six-year terms after his mandate expires in 2024.

The amendments also included populist measures such as an effective ban on gay marriage.

Leading opposition politician Alexei Navalny has said the poll had set "a record in faking votes" and the result had "nothing in common with people's views".

Many in Pushkin Square said they had turned up to protest the changes championed by Putin who can now potentially stay in the Kremlin until 2036.

"I voted against," Inna Golovina, a 46-year-old accountant, told AFP.  "People say the results were rigged."

Pavel Tarasov, a young Moscow city councillor representing the Communist Party, said he would like to leave his signature but the crowd was too big.

"The results of the vote do not suit anyone," he said.

A large group of mostly young activists later split off and marched along central Moscow streets before many were roughly detained.

Galyamina was detained in Pushkin Square after the signature-collecting event was over.

Up to a thousand people gathered for a similar event in the second city of Saint Petersburg, an AFP correspondent said.

"The authorities do whatever they want, people's opinion does not interest anybody," lamented Andrei Stepanov, 50.

"We need to show in some way that we are against this."

Anatoly Naidyonov, 38, compared the Russian president to a "pharaoh who is completely detached from reality".

"This can all end badly for the country," he added.

Earlier Wednesday parliament's lower house approved,at a key second reading, controversial legislation that allows elections to be held over three days, in a move the opposition said was aimed at further hollowing out democratic polls.

The amendments allow elections to be held outside polling stations and enable voters to cast ballots in various public spaces.

During the June 25-July 1 plebiscite, makeshift polling stations were set up at unlikely locations including buses, tents and street benches.

The voting process, which was not monitored by proper election observers, was ridiculed on social media.