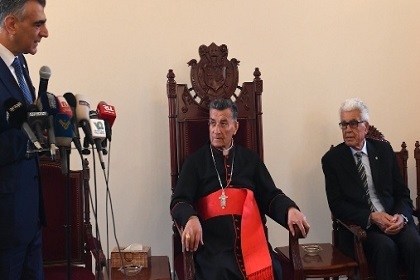 Maronite Patriarch Beshara al-Rahi on Monday hoped all Lebanese will show a “unified stance” on his calls for neutrality.

“We hope all Lebanese will show a unified stance in order to reach a resolution from the Security Council and the U.N. stipulating that Lebanon has an active neutral system that should be respected by all countries,” said al-Rahi during a meeting with a Kataeb Party delegation in Diman.

“It would then respect itself and become a state that is strong through its institutions and army and it would defend itself against any foreign aggression,” the patriarch added.

Stressing that “certainly we and Israel are in a state of constant animosity,” al-Rahi said “active and positive neutrality is our responsibility all.”

“It is a huge responsibility, especially that Lebanon was the hospital, hotel, tourism and freedom of Arabs and its neutrality allowed it to gain these labels, but when we engaged in alliances, parties and military acts we became fully isolated from Arabs and the West,” the patriarch added.

Hezbollah will never agree to this -- they are running the country and the neutrality proposal is coming from someone representing a small minority. Not sure why it's getting so much coverage here.

The proposal has wide local and international support among the majority of Lebanese and nations else it would not have seen the light.
It is not about the *who* made the proposal, it's about *the proposal* itself. Of course there will be those that try to undermine it for reasons tat have nothing to do with Lebanon or the Lebanese's benefit or well being.

Dude.. bigjohn.. you know.. that one doesn't work for me... I gotta have more cowbell!!

When exactly will you finally answer a comment, on any subject, on Naharnet, without coming out and blaming Israel for everything.
It is about time you sat down and started trying to explain to yourself what has Israel got to do with the growing Hizballah control of Lebanon, the electricity crisis, the currency devaluation, the allowing of the decendents of Arabs who arrived in Lebanon in 1948 to continue living in camps, of keeping arms and completely defying the control of the legal government, not to mention the millions upon millions (and you can quote it in any currency) of governmental money that has disappeared into private pockets.
So, sir, wake up and control yourself.