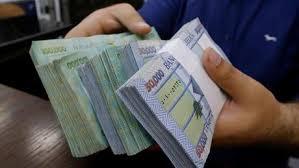 The "political-financial system" controlling the country has reportedly worked "with all its might" to "thwart" the plan to recover stolen and smuggled funds outside Lebanon when depositors were prevented from obtaining their money from banks, al-Joumhouria daily reported on Wednesday.

A source close to the International Monetary Fund, told the daily on condition of anonymity that “the political-financial system in Lebanon used all means possible to reach its end beginning with forgery of numbers, spreading false news and levying lawmakers.”

“The group exerted strenuous efforts to fail the recovery of stolen funds when depositors were prevented from withdrawals. It also seeks redemption of (funds) gifts obtained through “financial engineering,” which exceeded 30 billion dollars at the expense of ordinary depositors,” he told the daily.

“Although the IMF fund staff viewed the government's figures on losses in the financial system as in the “right magnitude,” the group insists the figures are wrong,” added the source.

“The IMF threatened to halt bailout negotiations with Lebanon if the figures do not get approved by the central bank and if the (Finance and Budget) parliamentary committee keeps insisting to have it altered,” he said.

The same “system” claims the IMF shall accept a new approach based on seizure of public property while preserving their bank shares at the expense of depositors who will not be able to release their funds with the banks, according to the source.

However, he assured that the IMF reiterated the government’s “correct” basic plan approach because it allows the “quick” release of the majority of Lebanese deposits and secures a fresh start for Lebanon.

"The IMF did not change its position, a stance coherent with the international community and France's on Lebanon," he concluded, noting that Lebanon expects the visit of French Foreign Minister Jean-Yves Le Drian on Wednesday.