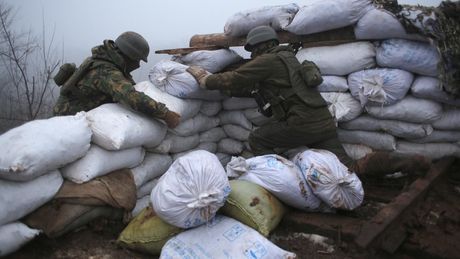 Ukrainian troops and Moscow-backed separatists began a tense ceasefire Monday in a new bid to try and end years of hostilities in the ex-Soviet country's east.

It came into force from midnight Monday and had been agreed last week by negotiators from Ukraine, Russia and the OSCE.

The Ukrainian army said an order had been issued to comply with a "full and comprehensive ceasefire."

Representatives of the self-proclaimed Donetsk People's Republic in Ukraine's east said no violations had been registered so far.

Under the terms of the agreement, the use of any weapons, including small arms, is prohibited.

Since the conflict broke out between Kiev forces and pro-Moscow separatists in 2014, there have been numerous attempts to end the fighting but those ceasefires never held long enough to pave the way for peace talks.

Putin stressed the importance of implementing a Western-mediated peace deal agreed in Minsk in 2015, the Kremlin said.

Ukraine has been fighting separatists in the Donetsk and Lugansk regions following Moscow's annexation of the Crimean peninsula in 2014.

More than 13,000 people have been killed in the conflict so far.

Kiev and its Western allies accuse Moscow of supporting the separatists with troops and arms, a claim the Kremlin has always denied.

Four-way talks between France, Germany, Russia and Ukraine seek the withdrawal of heavy weapons, the restoration of Kiev's control over its borders, wider autonomy for the Donetsk and Lugansk regions, and the holding of local elections.