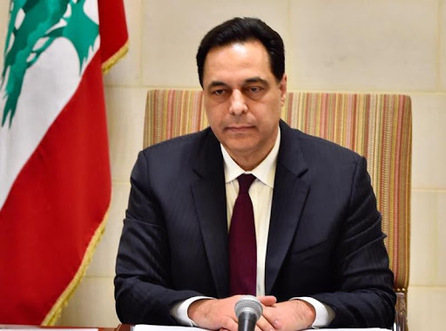 PM Hassan Diab voiced concern during the Higher Defense Council meeting on Tuesday of Israel’s recent “dangerous military aggression” in South Lebanon, warning of its bid to change the tasks of peacekeeping forces in Lebanon and rules of engagement.

“Israel assaulted Lebanon's sovereignty again and violated Resolution 1701 yesterday through a dangerous military escalation. The enemy is seeking to amend the tasks of UNIFIL and the rules of engagement," said Diab in his government's first official response to Monday's shelling.

"I call for caution in the coming days because I fear that things will get worse in light of severe tension at the border," he said.

On Monday, Israel said it had repelled an attempt by Hizbullah to penetrate its territory.

But Hizbullah "confirmed" in a statement that it did not take part in any clash and did not open fire.

The Israeli army had said a group of three to five men armed with rifles crossed the UN-demarcated Blue Line in the disputed Mount Dov area, claimed by Lebanon, Syria and Israel.

It said the "terrorists" had fled back to Lebanon after an exchange of gunfire and that Israeli forces had fired artillery into Lebanon "for defensive purposes".

But Hizbullah, which has a presence in the area where the incident occurred, denied any involvement.

It said that reports of Israel thwarting an infiltration from Lebanon are "completely false."

United Nations peacekeeping force UNIFIL said it had opened an investigation into the incident.

Diab on Tuesday accused Israel of trying to "change the rules of engagement," that have existed between the two countries since the end of a month-long 2006 war -- the last direct conflict between the two states.

He also said that Israel was pushing to alter the mandate of UNIFIL before it expires late next month.

In early May, the US ambassador to the UN, Kelly Craft, called on the world body to "pursue serious change to empower UNIFIL or realign its staffing and resources," because the mission was being "prevented from fulfilling its mandate."

Hizbullah chief Hassan Nasrallah swiftly rejected the proposal which he said was an Israeli demand.

Hizbullah, whose fighters back Damascus in the nine-year-old Syrian civil war, said one of its own was among the dead.

Since 2011, Israel has launched hundreds of strikes in Syria, targeting government troops and allied Iranian and Hizbullah forces with the stated aim of ending Iran's military presence in Syria.

I wish I could wake up to this news article: "Diab voices concern after border clash": "I am not sure if it is wise of us to let a militia (partly) outside government-control roam free. Especially after discovering that we are broke after decades of theft and corruption, and we no longer have rich friends with carte blanche-checks that is willing to bail us out."

We know this is a kizb government--their words and actions ALWAYS reinforce that notion. No to stopping smuggling, no to reforms, and turning a blind eye to kizb actions. And they wonder why no world powers will talk with them....

Maybe the Arabic version says something else, otherwise there is no possible excuse/ explanation for the Government of the Republic of Lebanon to refuse to fulfill its obligations under these resolutions.

It's fair to say -- and likely the unofficial government position -- that the Hezbollah "militia" is part of the LAF, in fact, it's the most powerful part.

Who listens to Diab? certainly not the governments around the world. He is and continues to be a Zero in Lebanon and elsewhere.