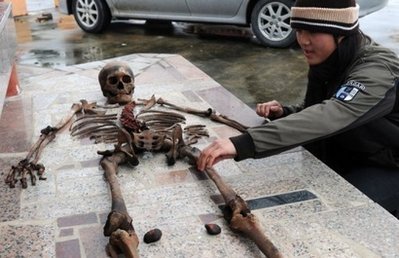 Like many Taiwanese teenage girls, Lee You-fang likes to sing pop songs and play with her pet dog, but she has an unusual job: working with the bones of the dead.

For five years, 19-year-old Lee has honed her craft as a "bone collector," assisting her father in an ancient funerary rite that involves collecting, cleaning and arranging human skeletons for reburial.

She began working full-time after graduating from high school last year, following in the footsteps of her great-grandfather who started the family business eight decades ago.

"Many clients were very surprised when they saw me because there are very few women in this profession," she said during an interview at a cemetery in Tainan, southern Taiwan, while taking a break from washing bones.

Lee may appear timid with her girlish face and a soft voice but she betrays no fear when it comes to her special line of work.

"Everyone I met asked if the job was frightening and my answer was always no," she said.

"I remembered watching my grandfather and my father at work since I was in elementary school and I didn't feel scared then. I was more curious to see the bones."

To prepare for the reburial, bone collectors first open the tomb to remove the remains of a body, and they have to be careful not to inhale the odor the moment the coffin is opened.

"This can be the most dangerous and probably the scariest part as some bone collectors died from inhaling the poisonous smell," she said.

"My grandfather once opened the coffin of a woman and the body practically 'jumped up'. Everybody fled in panic thinking that she'd come back to life. But actually the body hadn't decomposed, and it was her hair that caught the lid."

The next step involves cleaning the bones with alcohol before putting them back together to be dried by the sun and wind.

The spine is tied with a red thread and a tree branch while parts of the skeleton are marked with red ink to symbolize blood and family lineage.

Prayers aimed at blessing the deceased and their offspring are recited, while the skeleton is put in an urn and enshrined in a pagoda rather than in the ground.

Lee and her father often have to climb high mountains to reach remote cemeteries where they dig out the bones, she said.

"We often found poisonous snakes or big red fire ants lurking around the tombs. Frankly I am more scared of the snakes than the dead because snakes can bite me."

Bone collecting is linked to a belief that the feng shui of ancestral graves will affect the lives of the descendants and that a reburial can help turn around luck in difficult times.

Feng shui, which means "wind and water," refers to the ancient Chinese art of geomancy put into practice in interior decoration and in finding ideal locations for homes, offices and tombs.

"Being a bone collector is about doing good things. We help the dead rest in peace and move on to another world," she said.

The Lees recently worked on a case for a family who opted for the ritual when some members developed health problems after their ancestral graves were flooded.

"The work paid well in the old days so it was passed down from generation to generation in my family," said her father Lee Ta-sung, 49, who started out when he too was a teenager.

But the profession has been on the wane, he said, since the government banned burials in some densely populated parts of the island several years ago.

Besides the scarcity of land, increasing numbers of people now choose to cremate deceased relatives because of the lower cost, which is about half that of a burial.

"Now we have fewer cases since people see cremations as cheaper and less troublesome," Lee said, adding he now has 30 to 50 cases monthly, down from 200 at the peak some 20 years ago.

Despite the uncertain future, Lee has passed on his knowledge to his daughter in the hope that the girl can one day take over his practice.

"We will continue to work as long as our services are in need. We are helping others and also accumulating good karma for ourselves," he said.