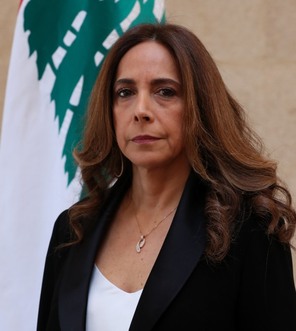 Deputy PM and Defense Minister Zeina Akar has stressed that the government was not "absent" during and after Monday's flare-up on the Lebanese-Israeli border.

"It condemned the Israeli attacks and considered them a threat to the climate of stability in south Lebanon," Akar told al-Quds al-Arabi newspaper in remarks published Sunday.

"The foreign minister also sent a letter to the U.N. in this regard," she added.

Asked whether defending Lebanon has become "the military and political specialty of a group of the Lebanese," as suggested by al-Mustaqbal Movement, Akar said "certainly not."

"Defending Lebanon remains one of the missions of the army, which maintains full preparedness and is fully ready to defend Lebanon and its security and stability," Akar went on to say.

What a clown! So when hezbollah carries out an operation against Israel, it informs the Lebanese government of its actions beforehand?

and when hezbollah goes to kill civilians in Syria and one of its members gets killed in a foreign land, then it has the right to retaliate from Lebanese territories and of course it informs the Lebanese government of its actions.:)

Never has Lebanon known or seen a Deputy PM and Defense Minister who knows about Defense and shawarma as much as this one, ever!

The zionist enemy should be afraid just looking at her!

They have tanks which look better

By the way, what you call the "Zionist enemy" is in fact the State of Israel which does not regard the Republic of Lebanon as an enemy.

You minister of nothing. Stop making a fool of yourself. Honestly, anything to do with hizbis is forbidden or not commented on - it's clear as day your neither independent nor competent. You're a back office bureaucrat at best; your current post is WAY out of your league or ability have some pride and self respect and leave.

Took her almost a week to respond---obviously she is on top of things. smh

Unfortunately Lebanon cannot be trusted. No IMF assistance until 100% transformation and reforms. Talk is cheap. 100% of existing politicians should resign. Early elections needed for new officials BY THE PEOPLE FOR THE PEOPLE. 100% of those in office now are supported by a party behind the scenes. Enough! You all robbed this country of everything and you want God to bless you?

Hassan Diab says he will hold those responsible in the port explosion. Once again, just political talk. What else can he say? Does anyone really think he will hold Hezbollah accountable? He's in office because of Hezboklah. Hezbollah controls the airport & port of Beirut. No solution to Lebanons problems until anyone and everyone who has ever served in government is ousted and replaced by new elections where the voters will vote for new people to serve Lebanon first, not themselves!