Al-Rahi: Anyone who Cares about Lebanon Wouldn't Reject Neutrality 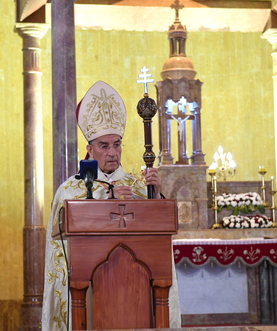 Maronite Patriarch Beshara al-Rahi on Sunday said those who "truly care" about Lebanon would not reject his call for the country's neutrality.

"I don't know if someone who truly cares about the welfare of Lebanon and its people, as well as its unity and return to prosperity, would reject or question this active neutrality or claim that it does not enjoy consensus or that it is hard to achieve," al-Rahi said in his Sunday Mass sermon.

Shiite spiritual leaders have criticized al-Rahi's call for neutrality and suggested that it is unrealistic.

In his most recent remarks on the issue, Grand Jaafarite Mufti Sheikh Ahmed Qabalan said "the issue of neutrality is impossible, not because we don't want it, but rather because it is totally infeasible."

Of course it's not feasible till your puppet strings are pulled from the neanderthals in iran. Neutrality means the end of your war mongering cancerous plague - that's the only reason its not what you want. Filthy traitors.

For valuing Nutrality and giving up dignity and foreign interference, what a stupid thing to say by a man who has a Fish Sign on his head, a symbol of telling information..

I believe Lebanon will be better off when the constitution will change and equal (all inclusive,also political) rights for all Lebanese ,meaning religious leaders have nothing to do with politics, subsequently militia leaders will become obsolete . Lebanon of today is stil a product of the Ottoman feudal era, based on divide and rule approach, ensure that the population is dependant
of certain families and the latter are controlled by foreign powers. Since the independence all attempts to govern and manage were window dressing.

Neutrality is a the way out of this chaos and into economic stability and prosperity, but how do you plan to implement such plan in a country so diverse and armed with militias? Lead the way please...
...