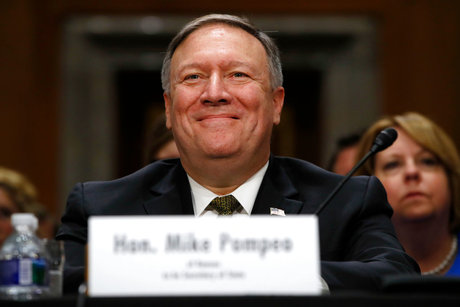 Sudan's government has welcomed remarks from U.S. Secretary of State Mike Pompeo this week that he would like to delist Sudan as a state sponsor of terrorism, local media reported.

Pompeo has repeatedly indicated that the State Department hopes to remove the designation, which severely impedes investment to Sudan, but disputes have arisen on a compensation package over the 1998 bombings of two U.S. embassies.

The U.S. top diplomat told the Senate Foreign Relations Committee on Thursday that legislation on a settlement should come before Congress "in the very, very near term."

According to an English-language report by official news agency SUNA, the Sudanese transitional government on Saturday welcomed Pompeo's statement and "promised to do its level best to meet the requirements that would help the (American) administration" take "positive action."

Independent online news site Sudan Tribune reported the government had said in a statement that it "is ready to continue working with the U.S. administration to remove Sudan from the list of state sponsors of terrorism and enter into a partnership relationship that benefits both countries."

Pompeo said that the fall of longtime dictator Omar al-Bashir following mass protests and the nearly year-old government of a civilian prime minister, Abdalla Hamdok, marked "an opportunity that doesn't come along often."

"There's a chance not only for a democracy to begin to be built out, but perhaps regional opportunities that could flow from that as well," he said.

"I think lifting the state sponsor of terrorism designation there if we can... take care of the victims of those tragedies would be a good thing for American foreign policy," Pompeo said.

According to SUNA, Hamdok reaffirmed "his commitment to continue exerting efforts with all friends in the United States and abroad" to bring the issue to a close and for Sudan to fully return to "be part of the international community."

Bashir had welcomed al-Qaida chief Osama bin Laden and Sudan was accused of aiding jihadists who blew up the embassies in Kenya and Tanzania, killing 224 people and injuring around 5,000 others.

Sudan's new government has agreed to a compensation package but a dispute has arisen over higher payments to Americans than to Africans, who accounted for the vast majority of the casualties.